Don Giovanni at the Komische Oper in Berlin 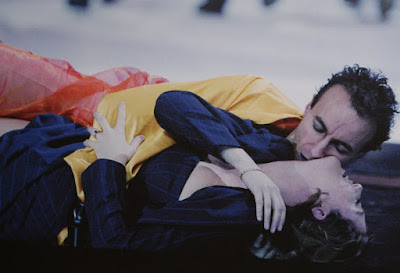 On Monday night I had the pleasure of attending the most unusual opera production I’ve ever seen: Don Giovanni at Berlin’s Komische Oper. Berlin is famous for experimental opera productions, and this is the first one I’ve been to. I was blown away.

As a disclaimer, let me say that I have never written an opera review before. I’m no expert on opera, but I do enjoy the medium, and Don Giovanni is my favorite opera of all. This was my fourth time to see Don Giovanni, which is one of the few operas I’ve seen more than once (and the only one I’ve seen more than twice). I used to listen to it all the time on CD, back when I lived in Southern California and spent a LOT of time in my car. In other words, I know this opera extremely well, which is why I feel qualified to write about it. At least, that is, I know the version with the Italian libretto by Lorenzo Da Ponte; I can even sing along with some of the arias. If you are not so familiar with the plot of Don Giovanni, you can go to this Wikipedia link to read a synopsis of the plot.

I realize that saying Don Giovanni is your favorite opera is sort of like saying the Mona Lisa is your favorite painting; noone can really question its excellence, but it’s not a very unique or original preference, either. Mozart is my favorite composer – also not an original preference at all, but by no means universal. My mother’s favorite opera composer is Puccini, but I find his stuff too melodramatic. One thing I like about Mozart’s operas is the humor. But above all, I love the music.

The Berlin Don Giovanni was not like any other production I’ve seen. Even though it used Mozart’s music, it had a different libretto which gave the plot a significantly different nuance – enough to really question the moral implications of the plot as it’s been traditionally understood. 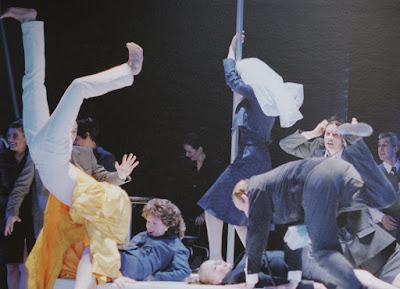 Most importantly, the singing was fabulous. Carsten Sabrowski as Leporello was magnificent; in fact, all of the cast were fantastic. Dietrich Henschel as Don Giovanni brought an amazing amount of energy to the stage. The women were fantastic too, especially Erika Roos (Donna Anna) and Elisabeth Starzinger (Donna Elvira). I loved every minute of it.
Where do I begin to describe this production? I think a list might be the best approach:

1. The Berlin production was not sung in Italian, much to my initial dismay. It was sung in German, and this was the first occasion on which I really, really wished I could understand German. The German text was written by Bettina Bartz and Werner Hintze. 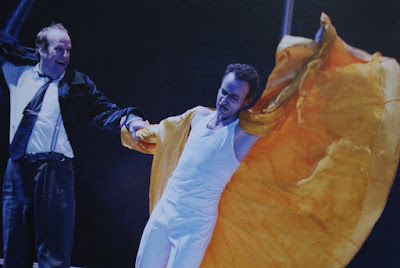 2. This was NOT a period piece. Most opera productions I’ve seen use period costumes (18th century in Mozart’s case) and at least minimal furniture and props to resemble rooms, streets, etc. Here the costumes were all late-20th-century suits and dresses, and there were hardly any sets at all. Most of the characters wore black or varying shades of gray, except for Don Giovanni, who wore all white with a saffron-yellow cape. He was also barefoot. The suits, I guess, were supposed to make the characters resemble mobsters; there were also a lot of guns. The characters all had sunglasses too. 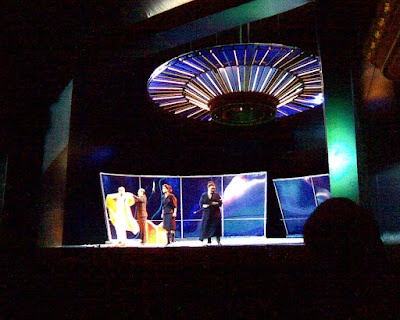 3. There was a giant revolving stage, with two sort of triangular “walls” that moved constantly to obscure and reveal different scenes and characters. Above was an enormous circular contraption with all the lights, which moved; I can’t really describe it, but I took some photos with my cell phone that give you an idea of how big this thing was and how it worked. It reminded me of the spaceship in Close Encounters of the Third Kind. 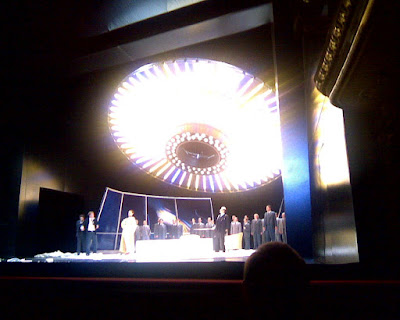 (Note on the photos: many of these – the good ones, where you can see the performers close up – are photos from the program; others are from my cell phone, and I’m sure you can tell which ones those are, i.e., the small and poor-quality photos.)

4. There was an interesting and unconventional framing device, in which three actors appeared onstage during the overture. These were NOT part of the opera’s singing cast, and their performance was done completely in pantomime. Their scene was the only part of the opera with period costumes. First there were just two actors: a boy (the young Mozart) seated at the harpsichord and banging silently away on it; and the tyrannical father standing over him at his lesson. Their interaction begins before the overture begins; then the father suddenly turns on the boy very aggressively, and that’s when the overture begins with its super-dramatic opening chords. The boy then throws open the harpsichord case, and a woman in a white sleeping gown, her head wrapped in a white turban, emerges from the instrument as if from a coffin and protectively takes the boy away from his violent father.

Critics have often remarked that the unforgiving character of the Commendatore in Don Giovanni, whose role in the opera is to punish the wayward young man, represented Mozart’s father; but this is the first time I’ve actually seen Don Giovanni staged in such a way as to foreground that Freudian reading. 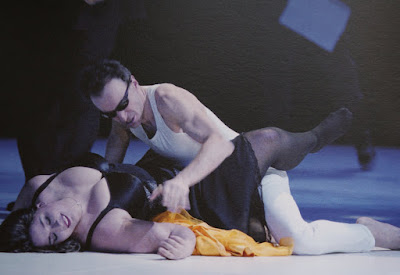 5. The opera’s opening scene is quite dramatic – while Don Giovanni’s servant Leporello is standing guard, Don Giovanni himself (better known by his Spanish name, Don Juan) is seducing Donna Anna. 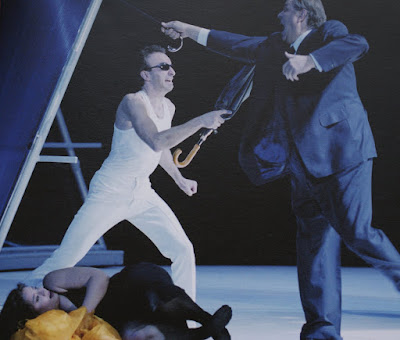 According to Mozart and Da Ponte, Don Giovanni is pretending to be her fiancé, Don Ottavio, and since it’s a dark room she supposedly can’t tell the difference. When Donna Anna discovers that it’s not Don Ottavio, she shouts (i.e., sings), and her father, the Commendatore, comes to her rescue. As he defends his daughter’s honor in a sword fight with the intruder and would-be rapist, he is killed by Don Giovanni, thus setting in motion the revenge plot in which Donna Anna and Don Ottavio pursue her father’s murderer.

In the Berlin production, however, Donna Anna clearly KNOWS this is not Don Ottavio, yet she is sleeping with the seducer anyway. And the father, rather than trying to kill Don Giovanni, is about to beat his daughter with his cane. Don Giovanni kills him in order to protect Donna Anna. Thus the moral implications of the original plot are turned on their heads – Don Giovanni is not such a cad, Donna Anna is not so pure, and the Commendatore isn’t such a great guy either. 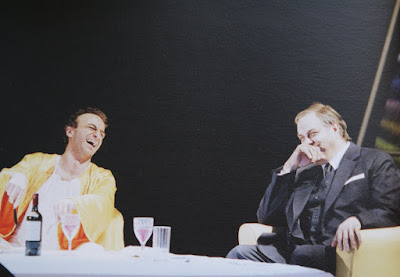 Really, this makes a lot more sense; I’ve always wondered about the strict moral tone of the original opera – its judgmental and moralistic aspects have always seemed incongruous with Mozart’s own personality and his life.

6. There’s a lot of skin in this production of Don Giovanni. And a lot of stripping. In fact, taking clothes off, then putting clothes back on so you can later take them off again, is one of the main onstange activities after singing. Clothes are the primary props in this staging of the opera. 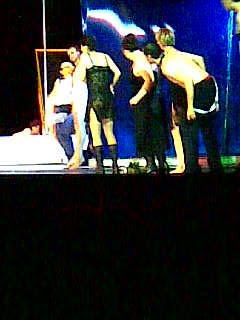 Left: Donna Elvira in a black lace teddy
This version of Don Giovanni is, overall, much more sensual than any traditional opera. The sexuality that is at the core of the Don Juan story is made much more explicit and more believable in this production. In fact, Da Ponte’s “wedding party” is, in the Berlin production, an orgy. There’s even a pole for pole-dancing in the Don’s living room.
Don Giovanni himself, played/sung by Dietrich Henschel, exudes a writhing sexuality and animal magnetism that the women in the story can’t resist. His appeal is necessary for a legendary seducer who has, according to the so-called “Catalogue Aria,” bedded 2065 women (plus a few more by the end of the opera). 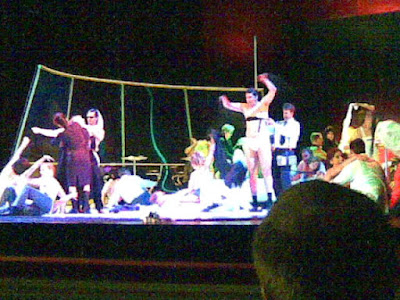 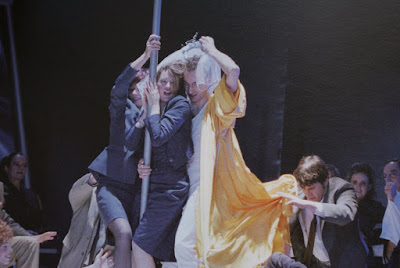 7. Then there are the guns. In the second act, the performance takes a major departure from tradition; five characters get shot, beginning with Masetto (the bridegroom). His bride, Zerlina, sings her love song to his corpse. In traditional stagings of the opera, it always seemed a bit awkward to have Masetto on stage being sung to, not singing anything himself, and serving as a living prop in Zerlina’s performance. In this production, his role is a whole lot easier – lying there dead while she sings to him. It makes sense, in a way; if he’s not actually doing anything or singing anything, he might as well be dead, right?

In another dramatic departure, Don Ottavio is singing his climactic aria when Donna Anna shoots him in the back. (In this production she never really seems to like him very much anyway.) He doesn’t fall down, he just stops singing and launches into a lengthy spoken monologue. Unfortunately it was in German, so I had no idea what he was going on about; I’m sure it shed some light onto the strange interpretation of the opera that we were witnessing. Then he finishes singing the aria.

Need I point out that there are no guns in the Mozart / Da Ponte version of Don Giovanni? Especially not handguns. And these characters – Masetto, Zerlina, Leporello, and Don Ottavio – do NOT get killed in the original opera. (I know there was a fifth one, but now can’t recall which character it was.) 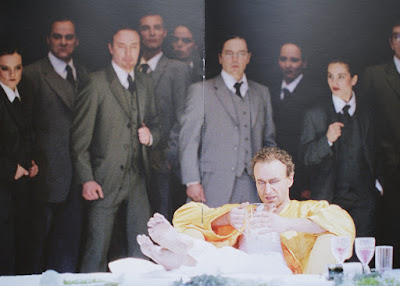 8. And THEN, all those characters who got shot and killed REAPPEAR onstage to perform their roles. But it’s not as if nothing had happened. In fact, when Don Giovanni brings the Commendatore home (somehow not realizing it’s a ghost sent to punish him), the rest of the cast (including the large chorus) reappear onstage wearing light gray suits; instead of Don Giovanni being pulled down into hell, he is dressed in light gray suit by the rest of the cast, who, we can safely assume, are themselves dead and residing in the underworld to which Don Giovanni is being brought.

ALL of the cast are in that underworld of punishment – Donna Anna, Donna Elvira, etc. etc. It’s not just Don Giovanni who is condemned for his crimes, his sins, and punished; it seems that everyone is in for some share of blame. But it also seems more like a party than a punishment. Donna Elvira pulls a camera out of her backpack and takes photos of people posing with Don Giovanni and each other.

It’s all a bit crazy. But then, isn’t opera already a bit crazy? I think Mozart himself would have approved of this production.

Left: Don Giovanni in - what? - opera underwear? I didn't know there was such a thing.
Final Note: I attended Don Giovanni with our friend John Evelev who was visiting from Missouri. I have to thank my wonderful husband who made the whole evening possible, because he stayed home with our son because we couldn't get a babysitter. He even paid for my ticket!
Posted by Elizabeth Hornbeck at 5:12 AM

Next time you go to one of these, take me with you!