An Update from the University of Missouri 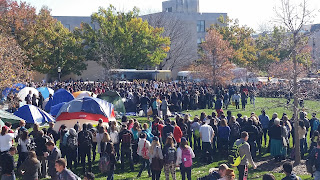 On Monday, November 9, 2015, Tim Wolfe, the president of the four-campus University of Missouri system since February 2012, resigned. Later the same day, the chancellor of the University of Missouri’s main campus in Columbia, R. Bowen Loftin, also stepped down, less than two years after coming to Mizzou. Both were responding to months of protests on campus by graduate students, faculty, local and statewide citizens, and finally black undergraduate students, including members of the football team. One courageous graduate student went on a hunger strike demanding the president’s resignation. These students—grads and undergrads—had formed the group #ConcernedStudent1950 to call attention to the University’s deeply racist history; although founded in 1839, MU did not admit black students until 1950.

The changes brought about by these amazing students are something we all can and should be proud of.  As a faculty member, I can say that I and most of my faculty colleagues—in fact ALL those I’ve spoken to or heard from—feel the changes that have taken place over the past three months have been very positive and very beneficial for the campus as a whole. Personally I am so very proud of our students, and I am so inspired by what they’ve accomplished. And I’m proud of all the faculty who have stood up for and with those students, and have suffered unimaginable attacks and threats from a hostile public for doing so.

To be clear, for those readers who may not be as intimately familiar with the goings-on here in Columbia, the departure of Wolfe and Loftin was not all about race; there were so many issues that troubled students, faculty, staff, and our community (which includes the entire state of Missouri). Opposition to these two leaders was strong among faculty, staff, and even high-level administrators—the deans of all of MU’s schools and colleges signed a letter demanding Loftin’s departure. Two campus departments issued unanimous letters of “no confidence” in the Chancellor. (See this Columbia Tribune article on Long-Standing Issues at MU.)

The issues that had been brewing on campus for months, even for years in some cases, were too many to enumerate fully, but included attacks on graduate student funding and health insurance, attacks on Planned Parenthood, complete lack of transparency in decision-making, and failure to act on racist incidents at the University. It was this last issue that finally brought about the much-needed change on campus, and brought the attention of the national media to our door. Most specifically, it was the decision by black football players to strike in support of the demands of #ConcernedStudent1950 and the hunger-striking student, that made folks from all over the country feel they had a stake in what happened here. After all, what’s more important than football?

There were many, many problems on our campus, but it was the black student protests that finally brought down these two incompetent leaders, Wolfe and Loftin. Strengthened by the “Black Lives Matter” movement, and in the same state as Ferguson, black students at Mizzou (including black football players, who are first and foremost students) felt empowered to demand change that has long been overdue.  But the fact remains, Wolfe and Loftin HAD to go, for a variety of reasons.

Wolfe and Loftin did the right thing by stepping down. But the reactions on social media, as well as on a number of bogus-“news”-sites (like Fox Sports), displayed an outpouring of anger—WHITE anger—from people who have no familiarity with what has been going on at our campus; and of sympathy for the two very powerful white men who were apparently perceived as the poor victims here, giving in to the demands of spoiled children and the so-called “radical left” (i.e., their MU faculty supporters) who have supposedly trampled all over free speech and press freedom.  I have repeatedly heard comments to the effect, “Poor Tim Wolfe, why is he being blamed for some idiots shouting racial slurs on campus? What’s he supposed to do about it? It’s not his fault!” Anyone who thinks this came out of nowhere, or in response to just a one-week-long student protest, is either completely ignorant or deliberately obtuse.

For some observers outside the University opining via social media, recent incidents of racism on campus sound annoying but harmless.  Some ignorant folks have suggested that black students were overreacting to being called racial slurs on campus. (See this NPR article on "whiny" protesters.)  I’m astonished that anyone could be so insensitive and dismissive of these students’ experiences.  The truth of the matter is, these incidents were NOT isolated, and they were certainly not harmless.  Anyone who knows anything about American history should know that the use of these horrible racial epithets has frequently been accompanied by racial violence, even lynchings, with no repercussions for the perpetrators.  So even if the jerk yelling the n-word at a group of black students gathered on campus was not literally threatening to lynch them then and there, the act of hurling that abusive language is embedded in a historical, entrenched pattern in which that word has been used to threaten, warn, and intimidate its targets, who know that physical violence is always percolating beneath that veneer of “harmless” “free” speech.

I have taught at the University of Missouri since 2003, and I have been aware of many racist incidents on campus over the years, mainly consisting of graffiti and vandalism. (See this New York Times article on racism at MU.) One particularly notorious incident happened in 2010 when two young white men strew cotton balls all over the lawn outside the Gaines/Oldham Black Student Center, referencing picking cotton under slavery. Subsequent forums to address the racial climate were very educational; black community leaders came to campus to talk about the history of the black community in Columbia and to share their historical perspectives; faculty and students listened, and marshalled our expertise on holding “Difficult Dialogues” to promote understanding among members of our campus at various fora. At the Black Studies Conference (which happens every other year), a student in the room asked a panel of faculty and grad students, “why do we have Historically Black Colleges, but there aren’t any Historically White colleges?”  One of my faculty colleagues (who has since left the University, unfortunately) didn’t miss a beat; he replied “There are. You’re in one.”

It was surprising to find that some 20-year-olds were unaware that universities like ours didn’t admit black students for over a century. But these young people don’t have that historical memory, and if people around them don’t talk about history and race, they might never know.  Most of the students who were on campus at that time have moved on, leaving today’s crop of undergraduate students to feel as if these racist incidents have either come out of nowhere, or have been here all along, with no one trying to do anything about the problem.  Today, though, the University IS trying to bring about permanent change, positive change, under our new leadership.

The educational mission of the University demands that we keep working to change the campus culture, in order to make the campus a welcoming place for ALL our students.
Posted by Elizabeth Hornbeck at 4:14 AM No comments: