Living in a Windmill

During our week in Brittany, we drove numerous times along the coast between Cancale and about halfway to Mont-St.-Michel before heading away from the coast towards our tiny village of Bazouge-la-Perouse, east of Combourg. On this rocky, windy coastline were countless windmills, or I should say former windmills, most of which had been successfully transformed into houses or other useful purposes. According to our guidebook, The Rough Guide to Brittany and Normandy, a century ago Brittany had five thousand working windmills. That's right, five thousand. So it's not surprising that some of them have survived into the age of nuclear power in France and have been refunctioned.

It makes complete sense that these buildings should continue to have a useful life. I mean, they are solidly built stone structures that could endure indefinitely. It's nice to see that they haven't been allowed to turn into ruins (though I do like ruins).

Driving past them day after day I began to appreciate the myriad ways in which they had been transformed. Most simply have had a conical roof applied to them, as below: In this photo notice the miniature windmill standing in front of the house. It's not a mailbox, just a lawn ornament of a sort: [ha ha! as if the French would have anything so tacky as a lawn ornament!] 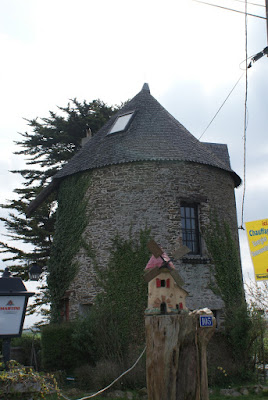 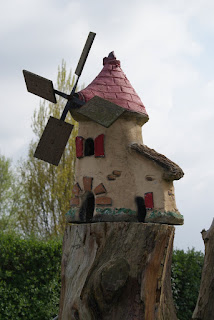 Other windmills have had rooms added onto them; here you can see the addition in the rear: 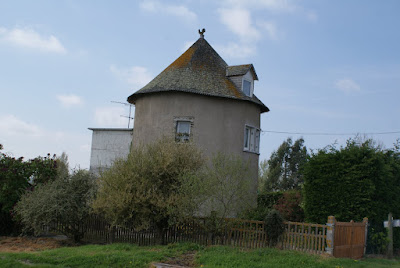 This one is my favorite: made to look really grand (for a former windmill), it has symmetrical exterior staircases on either side of the enlarged entryway; an enormous addition on one side; and even a balustrade around the roof so to create another level of usable space: 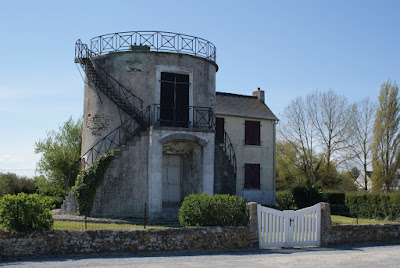 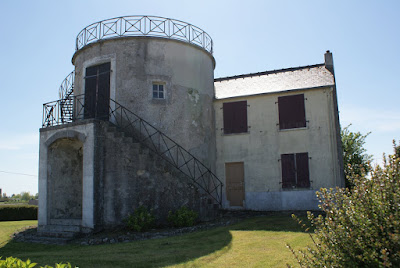 Now if only I could figure out how to get invited inside one of these fantastic structures...
Posted by Elizabeth Hornbeck at 4:28 PM