We Are Stardust, We Are Golden (Notes from Woodstock, New York) 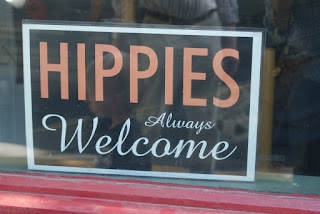 In 1919 Walter Gropius established the Bauhaus art school in Weimar, Germany, which would eventually become the most influential design school of the 20th century in Europe. Indeed, its impact would be equally significant in the United States, if not moreso, with the immigration of Gropius and other Bauhaus luminaries to this country during and after World War II. But in Weimar these weird artists were not all that welcome, especially personalities like the Expressionist painter Johannes Itten – the original teacher of the Vorkurs at the Bauhaus – who shaved his head and went around town in medieval-looking robes and worshipped an ancient Persian deity. Weimar was an important city for German culture of the hoch variety – Goethe and so forth – but its residents did not take kindly to these new, modern types of artists. Today they might be called “hippies,” or even “freaks” by some. But the term “hippie” didn’t exist in the 1920s in Germany. In 1925, the Bauhaus was forced to leave Weimar, and went on to greater fame (and a different artistic direction) in the town of Dessau.

I was thinking about this recently as it compares with Woodstock’s history as the home of two major art colonies, the Byrdcliffe colony (founded 1902 by Ralph Whitehead, an English disciple of William Morris), and the Maverick colony (an offshoot of Byrdcliffe, founded in 1904 by Hervey White). It was my grandmother who got me thinking about it, she said, “can you imagine? There was mostly no one here but farmers when these artists showed up, they didn’t know what to make of them!” She makes an important point, and I think it helps to explain one reason why New York is so interesting: instead of rejecting the artists and sending them packing, like in Weimar in the 1920s, the New Yorkers of the early 20th century accepted them, and in fact to some extent adopted the culture and the mindset of these artists. (It should be noted that the Hudson Rivers School of artists - including Frederick Church and Thomas Cole - had already established a strong artistic tradition in this region.) Woodstock is a very groovy place now because of the open-mindedness and the spirit of tolerance and acceptance that I think go back to New York’s early history.

New York is not part of New England, after all; New Yorkers didn’t burn witches at the stake. They didn’t persecute people who were different – at least not Europeans and Euroamericans. I know the Native Americans didn’t fare too well here; their legacy is mostly preserved only in the place names (like “Taghkanic,” or Taconic). In that respect New York is as guilty as the rest of America. But I think it’s significant that by the 20th century, folks could come here from abroad – the artists in the 1900s, the musicians in the 1960s, the Tibetan Buddhists in the 1970s – and not be labeled outsiders but rather could make important contributions to the local culture. Part of this, I’m sure, is a spillover effect from New York City, that original “melting pot” and port of entry for so many groups of immigrants.

When you go to the Wikipedia entry for Woodstock, it lists many famous musicians, artists, writers and other celebrities who have lived and/or worked in Woodstock, Bearsville, and other nearby parts of Ulster County. The local artists have contributed much to the local culture. The town is full of galleries, which is also, I believe, a function of its proximity to the art capital of the world about 2 hours or so away.

One local artist was Harvey Fite, a sculptor, who had been attracted by the Maverick artists' colony; personally I think his sculpted works are not all that interesting, but his major achievement was an extremely impressive large-scale earthwork known as Opus 40 in nearby Saugerties. Fite lived at this abandoned quarry – in a house he built himself – and over a period of 37 years transformed that quarry into a carefully laid-out network of walls, ramps, and cliffs, all assembled by hand from rough-dressed slabs of the quarry’s characteristic bluestone. Opus 40 was a labor of love. It transforms a scarred hole in the earth’s surface, wrought for economic exploitation, into a sublime landscape created purely as an expression of beauty. My husband and I got married at Opus 40, before the backdrop of the Catskill mountains, in 2003.

Woodstock’s musicians probably feature more prominently in the popular imagination because of Woodstock’s great “claim to fame,” the rock concert of 1969 on Yasger’s farm, about 45 miles away. Woodstock was a hub of musical activity well before the Woodstock concert (“3 days of peace and music”). Bob Dylan recorded his Basement Tapes in nearby Saugerties in 1967, at the house occupied by some members of The Band (that's right, “THE” band). My favorite song about Woodstock, though, was written by Joni Mitchell about the great 1969 rock concert:

I came upon a child of God, he was walkin’ along the road
And I asked him, “where are you goin’?” and this he told me:
“I’m goin’ on down to Yasger’s farm, I’m gonna join in a rock-n-roll band
I’m gonna camp out on the land, I’m gonna try and get my soul free.

“We are stardust, we are golden,
And we got to get ourselves back to the garden.

“And can I walk beside you, I have come here to lose the smog,
And I feel to be a cog in something turning
Well maybe it is just the time of year, or maybe it’s the time of man,
I don’t know who I am, but you know life is for learning.

“We are stardust, we are golden,
And we got to get ourselves back to the garden.

“By the time we got to Woodstock, we were half a million strong,
And everywhere there was song and celebration.
And I dreamed I saw the bombers ridin’ shotgun in the sky,
And they were turnin’ into butterflies above our nation.

“We are stardust (million year old comet), we are golden (caught in a devil’s bargain),
And we got to get ourselves back to the garden.”

Crosby, Stills, Nash & Young recorded a rockin’ version of “Woodstock” in 1970, but if you haven’t heard Joni Mitchell’s recording of it (on Ladies of the Canyon, 1970), you really should. It’s mesmerizing and evocative. Mitchell’s lyrics are an anthem of what one might call “hippie spirituality” – uttered by a “child of God,” which we all are (if you believe in any kind of a God at all). It’s a subtle spirituality that posits no religious dogma but instead a set of ethical principles having to do with love, community, utopia, and an emphasis on creating peace in this world, not the next.

So just what are hippies, anyway? I don’t think there’s a simple answer. A lot of artists are hippies, but not all of them, and not all hippies are artists, either. Same thing can be said of musicians. Then there’s “hippie spirituality,” which might also be called “New Age spirituality;” again, not all hippies are spiritual, many of them are atheists. Maybe even most of them. Then there are the proto-hippies (like Johannes Itten), followers of movements that embodied some of the same principles and values that in the 1960s came to be associated with hippies: the rejection of mainstream culture, in its various forms.

A new museum has just opened in Bethel Woods, New York (the actual site of the Woodstock concert). It's called The Museum at Bethel Woods and is dedicated to "The Story of the Sixties and Woodstock."
Posted by Elizabeth Hornbeck at 8:01 AM