The revolutionary postwar American artist Robert Rauschenberg died on Monday, May 12, at the age of 82, as reported in the New York Times on May 14 (obituary written by Michael Kimmelman). Along with Jasper Johns, Rauschenberg was one of the most important artists to react against the high-seriousness of modern art as represented by Abstract Expressionism. He revived the subversive, playful spirit of Dada artist Marcel Duchamp in his various collages, assemblages, and combines, including Bed (1955) and Monogram (1959). The former "combine painting" represents a bed splattered with paint in an Abstract-Expressionist manner; at the time, the New York Times described it as a “police photo of a murder bed after the corpse had been moved.” With his Neo-Dada artistic strategies, Rauschenberg attempted to bridge the gap between art and life, thus helping to expand our definition of art. 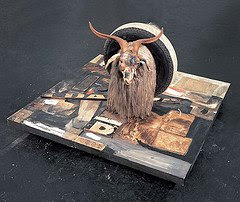 Rauschenberg was awarded the Grand Prize at the 1964 Venice Biennale, the most important international art exhibition. That's pretty good for an artist who never even saw a painting until he was an adult, a medical technician in the Navy Hospital Corps during World War II.

Rauschenberg's work in the 1950s and '60s, including many works on display at the 1964 Biennale, were fairly unmistakeable cultural and political commentaries on America's growing cultural hegemony. In Retroactive I (1963) Rauschenberg collages together images of American astronauts and President Kennedy, emphatically repeating Kennedy's "pointing" gesture, just one year after the Cuban Missile Crisis. 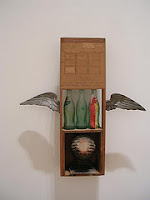 Likewise, Rauschenberg's collage called Coca-Cola Plan (1958) - three Coke bottles with wings, above a small globe - refers to global domination, and is a play on the Marshall Plan, sending Americanism over to Europe in the form of commercial mass culture.

Kimmelman's obituary is a must-read for anyone interested in American avant-garde painting, with lots more information about what Rauschenberg was up to during the past four decades. A fascinating scholarly account of the 1964 Venice Biennale can be found in Laurie J. Monahan's “Cultural Cartography: American Designs at the 1964 Venice Biennale,” in Reconstructing Modernism, ed. by Serge Guilbaut (Cambridge, Mass.: The MIT Press, 1990).

"Spencer Tunick, the photographer known for his mass nudes, did his thing on Sunday in Vienna, where hundreds of Austrian volunteers stripped in Ernst-Happel Stadium. It is the site of seven matches in the Euro 2008 soccer championships next month, , including the June 29 final, Reuters reported. Mr. Tunick said on his Web site, spencertunick.com, that the 'ephemeral installation' was 'devised to capture and combine the spirit of sports, the grand sweeping waves of stadium architecture and the abstract relation of the human form to modern structures.' "

Posted by Elizabeth Hornbeck at 4:27 PM