A Little Bit of Tibet, Here in the Catskills (Notes from Woodstock, New York)

Part of what makes Woodstock so interesting are all the different layers of culture and history that merge here. In the mid-1970s, a group of Tibetan Buddhists founded a monastery partway up Overlook Mountain; it's said that the climate and terrain reminded them of Tibet. This monastery is known as the Karma Triyana Dharmachakra, The Seat of His Holiness the Gyalwa Karmapa in North America .

Up on the mountain: 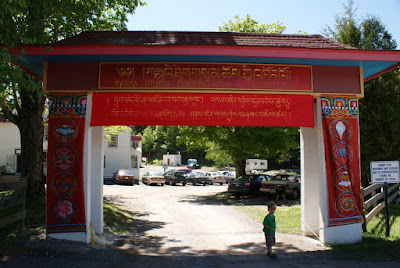 At the foot of the mountain: 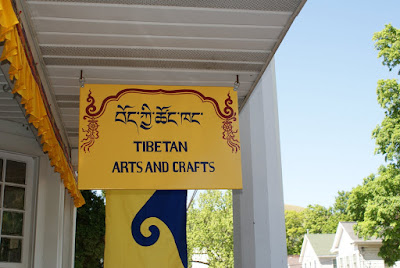 (The owner of this business is a master carpet weaver, a Tibetan born in Nepal and now transplanted to New York.)
The KTD monastery in Woodstock is the North American home of the Karmapa Lama, the head of the Kagyu sect of Tibetan Buddhism, which is one of four major schools of Tibetan Buddhism. He just visited the KTD monastery on May 19 for the first time (click here to read about his visit in the Woodstock Times and to see a photograph of the interior of the new shrine). The Dalai Lama himself visited the KTD monastery in 2007.
When the KTD monastery was founded in the 1970s, they were housed in this turn-of-the-century wooden frame building (which may originally have been a boarding house, it is so large): 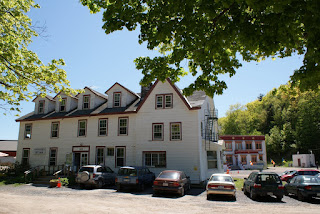 Now there is a new shrine building, and a much larger building is still under construction that will replace the old one seen in this photo. When I was a teenager (1980, perhaps?) my grandmother took me to a meditation / chanting service at the monastery; for a monetary contribution, we had dinner with the Buddhist community there as well. Today the KTD informs visitors that they can only provide meals to people staying there on retreats.

The presence of the KTD monastery on Overlook has permeated the town with a strong Buddhist identity. One local business has this marquee: 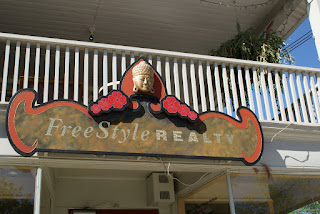 Outside the realtor's office, the sidewalk has this design: 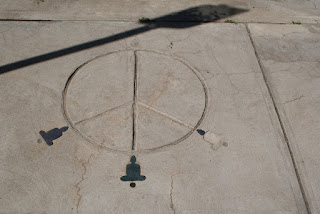 I think it's interesting how this western peace sign takes the place of a Buddhist mandala (a sacred, symbolic map used in Buddhist art and architecture) with the images of the Buddha set in the four directions -- not the four directions of the compass, but of the peace sign.
Posted by Elizabeth Hornbeck at 12:49 PM