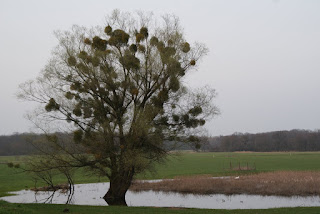 Who would've thought that mistletoe was actually such a nefarious character, after all the fond Yuletide traditions and carols? I had heard it before -- that mistletoe's an insidious parasite that chokes trees and kills them -- but never really believed it. Now I've seen it for myself. In Saxony (southeast Germany) it's everywhere, hanging from trees in these spherical clumps like some kind of Dr. Seuss invention.

What's more surprising is that we saw mistletoe clumps all over Brittany too -- the north coast of France. It's quite widespread in two such disparate places. We certainly don't see it in Berlin, and I've never noticed it anywhere else until now. I'm surprised the USDA allows mistletoe to be sold all over the US at Christmas time, they should be concerned about the plant's incredible ability to spread itself far and wide. But then again, I always thought that stuff they sell in little plastic bags had to be fake...
Posted by Elizabeth Hornbeck at 3:11 AM