The City of Shiva -- Varanasi, India 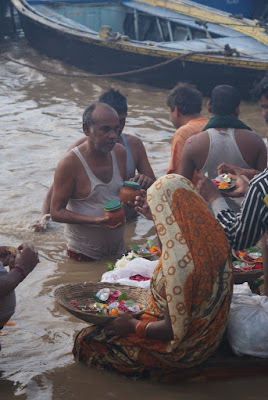 One of the most memorable experiences while I was in India in July was our visit to Varanasi, the sacred city of Shiva, the most holy of all the Hindu pilgrimage centers (tirthas) in India. I did not really know what to expect, though I knew it would be full of pilgrims as well as devout Hindus wanting to spend their remaining days in the city from which moksha is guaranteed (but only if you die there). I knew about the ghats, or stepped platforms and terraces, along the Ganges –some used for devotion, others for the mundane tasks like laundering clothes. Bathing can occur in either context – sacred or mundane.

The trip began in a jarringly memorable way: as we were boarding our plane, two coffins were sitting on the tarmac, waiting to be loaded into the cargo hold. Devout Hindus on their way to be cremated at the place where Lord Shiva would ferry their souls across the river to the great beyond. I realized that their grieving relatives would most likely be on the same flight with us. Having come to India almost directly from my grandmother's memorial service, I was all the more attuned to death and grieving. My grandmother was with me on that trip to India, in the way that people keep telling me she is always with me, in spirit. I kept wanting to share with her my experiences and impressions, and then realizing I couldn't. 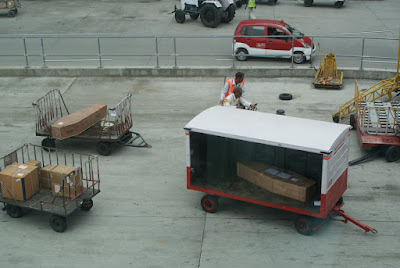 I was not surprised to find in Varanasi extreme contrasts with New Delhi. Varanasi is one of the oldest cities in India, and Delhi, while several centuries old, is also probably the most modern city as well. Delhi’s airport is only one year old, and road-building seems to have kept pace with the boom in population and in automobiles (unlike Hyderabad, for example, where traffic is a total nightmare).

Varanasi is intense – old, dirty, with narrow winding streets thronged with market stalls; the crush of pilgrims and tourists making their way to and from the ghats; religious fervor and fervent hawkers; pedestrians, bicycle rickshaws and automobiles all competing for space; very loud music! All of one’s senses are assaulted, between the fragrant aroma of flowers and the odor of cow dung, the loud music, the visual cacophony of colors and textures, foods both tempting and repellant. The heat, the humidity, the mud, and – once you get to the Ganges – the water (I stepped in up to my ankles) – it all overwhelms. Varanasi is like India itself – intense, larger than life, sometimes too much to handle, but somehow captivating.

We were there during a special month devoted to Shiva; in the lunar calendar it occurs only once every three years (or once every 32.5 months, according to Wikipedia). Pilgrims -- almost all of them young men, dressed entirely in orange -- travel on foot to Varanasi to gather water from the Ganges in small pots, and then to travel on foot to other Shiva temples located throughout the country to pour the sacred water on the Shiva lingam. In these photos you can see the decorated poles used by pilgrims to carry the Ganges water: 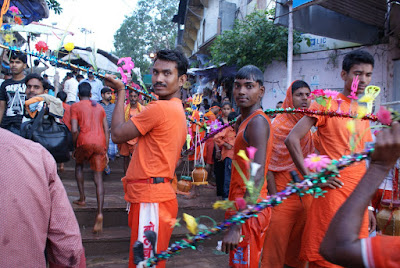 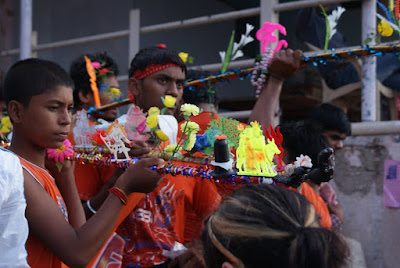 According to Subhadra Sen Gupta, Kashi may have been a Dravidian center of worship before the arrival of the Aryans in the subcontinent. The cult of Shiva dates to before the Aryans’ arrival, and Kashi is believed to be Shiva’s sacred city. Remains of a city wall dating back to the 9th century B.C. have been found on the northern edge of the city.

The city is known by many names:

1. Kashi (or Kashika, or Kashi Kshetra for the region of Kashi) is the name used in the oldest literary reference, the epic Mahabharata; it means “the Luminous,” or “the City of Light.” This is where Shiva’s jyotirlingam first appeared, a column of light that symbolized Shiva’s presence.

2. Varanasi – the city lies between two streams, the Varana (to the north) and the Asi (to the south); together they make the name Varanasi.

3. Benares – a mis-hearing of the word Varanasi

6. Rudravasa – the abode of Rudra (because one of the aspects of Shiva is as the Vedic god Rudra)

8. Avimukta: the Never-Forsaken, or the city never forsaken by Lord Shiva

There are some 80 ghats in Kashi, built mostly from red sandstone. The five most sacred ghats are the Asi, Kedar, Dasaswamedha, Panchganga, and the Manikarnika. (Some pilgrims prefer the Adi Keshava ghat to the Kedar ghat.) These are said to possess the most spiritual power and sanctity. The only ghat we visited was the Dasaswamedha Ghat, where the virtuous King Divodasa was forced by the gods to perform the horse sacrifice, or ashwamedha yajna, not just one but ten times. In the Vedic religion, the horse sacrifice was the most elaborate and auspicious ritual, and was performed only by kings because it required so much wealth. Divodasa performed his ten horse sacrifices here at this ghat, which thus became the most auspicious of all the ghats. Bathing here at this ghat brings you all the blessings of the ten horse sacrifices. 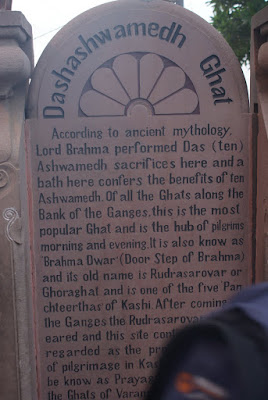 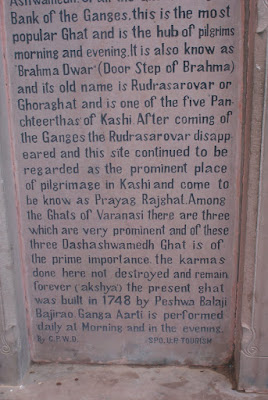 The Ganga Aarti is performed at the Dasaswamedha Ghat every morning and every night; this is a worship ceremony (puja) in honor of the goddess Ganga Ma (Mother Ganges): 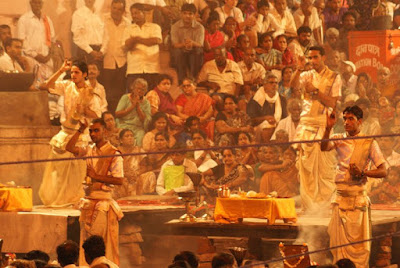 Our group got to watch the evening ceremony while seated in a boat on the Ganges. Several priests performed it in unison, circling fire, water vessels, incense, bells, and the other gifts made to the goddess. The ceremony signifies waking up the goddess in the morning, and putting her to bed at night. For the devout Hindu, the river IS the goddess, the living and energetic form of the divine; as we watched the puja being performed, we floated atop her divine presence, occupying the space between worshipers and worshiped.

Early on Sunday morning a small group of us went back to the ghat and in pursuit of the main Shiva temple in the city, the Kashi Vishwanath Temple. Not only are you not allowed to bring a camera into the temple, but you aren’t even allowed to bring a camera anywhere near the temple. There were two security checkpoints leading up to the temple, and I took a photo of this sign at the first security checkpoint saying that cameras are not allowed (plus I got yelled at for taking this photo as I walked past!): 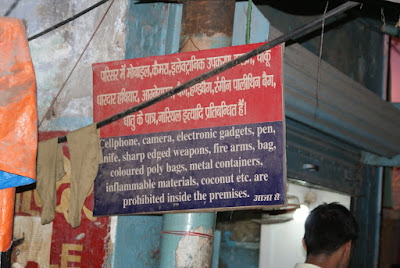 Foreigners are generally not allowed to enter the temple, either, so not surprisingly we did not get in. I was able to look into the two doors leading into and out of the temple, and could only see that it was really crowded with worshipers. We could see the tops of towers rising above the wall (at the point where we had already left our cameras behind). I stood in line hoping to get in, and came temptingly close, but an argument in line right in front of me slowed things down to a halt and I had to leave.

I’m not sure why foreigners are not allowed, but a couple of explanations occur. According to one of the leaders of our group, the Brahmins (priests) do not want non-Hindus in the temple, and are very adamant about it. For them this is the holiest of the holies, so that attitude is not surprising. A second explanation offered by an historian in the group is that Kashi is witness to quite a lot of communal violence, so in order to preserve security they are quite strict about controlling who visits important sacred sites.

Our final visit was to the cremation grounds, the “burning ghat,” where there were, indeed, a few cremation fires still burning. A yard filled with enormous piles of wood stood next to it; they performed about 100 cremations every day, so lots of wood was needed: 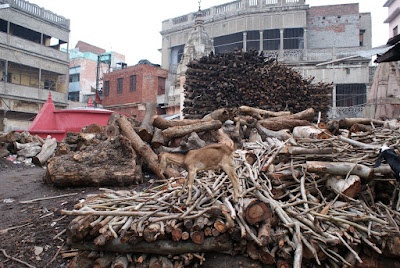 The photo of the cremation grounds was also not allowed, “for privacy,” but I couldn’t resist taking one picture: 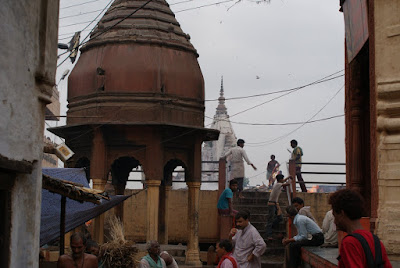 The fires were attended only by the workers whose job was to take all the ashes into the Ganges after the cremation was over. One of them invited me to walk closer to one of the fires, and the heat was really intense. He pointed out where the skull was still burning, and explained that after burning for two hours, they would smash the skull so that the soul could escape; then the fire would be allowed to burn for another hour, so that the cremation was complete. (I thought of my grandmother, whose body was cremated in January -- the Indian method is so much more visible and hence more tangible.) During roughly 24 hours spent in and around Varanasi, we saw numerous cars and trucks traveling with dead bodies, wrapped in shrouds, attached to the roof -- bringing them to be cremated here.

In my yoga practice, my teacher / guru, Sienna, talks about feeling cosmic vibrations, and reverberating with the universe. The sacred sound "OM" is supposed to help you get in touch with it, but even during practice -- even during shavasana, corpse pose -- one should be able to contact this place that's latent in consciousness. In Varanasi, this feeling came upon me, it snuck up on me unawares. After spending about two hours on foot exploring the oldest and most important areas of this sacred city, my body was shaking involuntarily, microscopically. It was as if every atom of my being was suffused with the energy of Lord Shiva. Maybe it was from the close proximity to death, beginning with the coffins at the Delhi airport and culminating in the corpse burning a few feet away from me. Maybe it was the cumulative energy of religious faith taken to its most extreme form. Maybe it was the opportunity, at last, to see a side of India that had eluded me in my visits to modernized cities -- Hyderabad, Bangalore, Delhi. I am still struggling to understand why I felt how I did.

I would have needed to sit for several hours in contemplation to absorb everything I had seen. The experience left me speechless, and I'm still trying to make sense of the emotional intensity I felt on that gray morning on the banks of the Ganges.