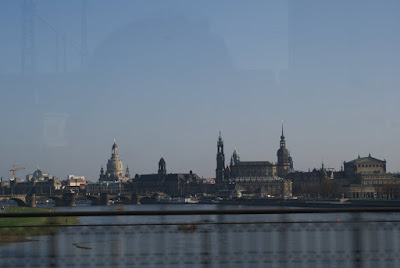 After two months in Berlin and our day-to-day activities (working, taking our son to and from school, etc.) we began an intense period of tourism, starting with a four-day visit to Saxony (eastern Germany near the Czech Republic) with visits to Dresden, Dessau, and Wörlitz. The city of Dresden was the seat of government of the Saxon kings in the 18th century, when they built lavish palaces and churches, and amassed impressive collections of art objects and curiosities. 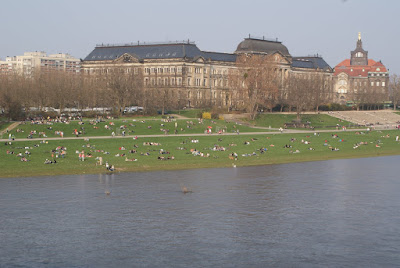 Dresden is an amazing city, and definitely worth a visit. It clusters along both sides of the Elbe River, and the city preserves a wide green belt along both banks of the river for miles in each direction. We were in Dresden on a gorgeous, warm spring weekend, and these banks were filled with sunbathers and picnickers. It is rare to see so much prime real estate being left open for public enjoyment, and not grossly privatized and overdeveloped. The public transportation in Dresden is great, making it a very easy place to visit.

Our current six-month sojourn in Germany has been a real learning experience for me, because in the past I have been much more interested in Italy and the Mediterranean, France, and England (in that order). I had only spent 24 hours in Germany before this year, with a one-day visit to Stuttgart (in 1996) to see the 1927 housing exhibition called the Weissenhofsiedlung. (I also spent a week in Vienna in 1998, which was my main exposure to German-speaking culture before now.) 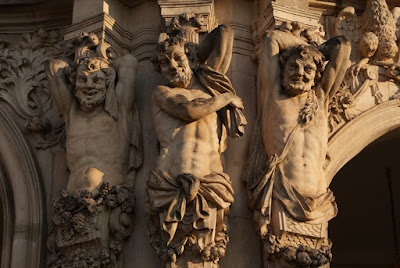 Dresden gave me a delightful introduction to the German Baroque, which was the architectural style favored by European monarchs in the 17th and 18th centuries. At the center of the Old City in Dresden is the palace of the Saxon princes and a number of other structures, the most impressive of which is called the Zwinger, built in an ostentatious and bombastic High Baroque style (which personally I find very appealing). Formerly a royal structure, the Zwinger now houses several museums, including the impressive Old Masters gallery, home of Raphael’s famous “Sistine Madonna.”

Of course Dresden was horribly destroyed in the Second World War. Tens of thousands of civilians perished in the Allied bombing of the city, an attack which took place after Germany’s defeat was imminent. (Civilian casualties have been estimated at anywhere between 25,000 and 250,000, according to Wikipedia.) The destruction of Dresden is widely regarded as a war crime, the subject of Kurt Vonnegut’s Slaughterhouse Five (based on Vonnegut’s own experiences as an American prisoner of war in Dresden). 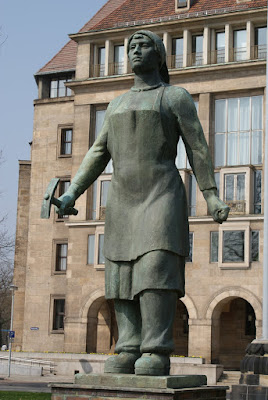 Overlaying the Baroque history of Dresden and its World War II trauma is the long period of DDR rule – the Deutsche Demokratische Republik (German Democratic Republic, or GDR, in English) – otherwise known as East Germany. The East Germans built tons and tons of ugly, enormous apartment houses and public buildings, the most banal kind of architecture imaginable. The East German government did not see fit to rebuild the city’s main cathedral, called the Frauenkirche (the Church of Our Lady).

Much of historic Dresden was rebuilt in the 1990s, after the reunification of Germany in 1989; it is now a UNESCO World Heritage Site. Although the rebuilt Frauenkirche incorporates as many stones as possible from the 18th-century one (they appear much darker than the new stones), the vast majority of it is from new materials. 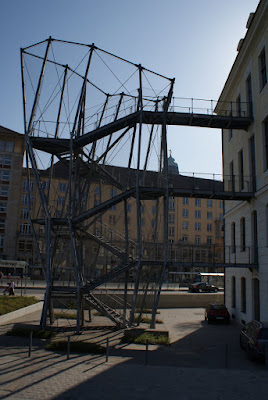 By the way, the Frauenkirche was NOT destroyed directly by the bombing of Dresden; it collapsed later as the result of a chain reaction. Many Germans sought shelter inside the church during the bombing and they survived, the church did not collapse on top of them. 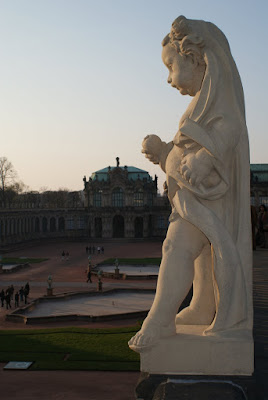 The Socialist government of the DDR was not very interested in restoring monuments from the feudal past or from the Church. However, they DID restore the Zwinger, which like the Frauenkirche is largely rebuilt from new materials. The Zwinger was and is a beloved Dresden landmark. A commemorative plaque on the Zwinger declares, “This masterpiece of Baroque art was destroyed by the Anglo-American terror attack of February 13, 1945.” It goes on to say that it was “lovingly reconstructed” by the DDR and the power of the workers. Its reconstruction was finished in 1964.

Besides this plaque, there is very little else in the city that commemorates or even mentions the widespread destruction of Dresden at the end of the war. History has a very strange status in Dresden – all the historical Baroque structures are reconstructions of the past two decades, while the great horror of the war that was experienced by so many in Dresden is almost completely erased. It’s a little strange.
Modern Ruins

Shown below: ruin of the "Orangerie." It's completely derelict, and this seems to be the only piece of the building that still remains; it's just down the road from the Zwinger. The old archaeologist in me couldn't resist investigating it, but I still haven't found out anything else about it. 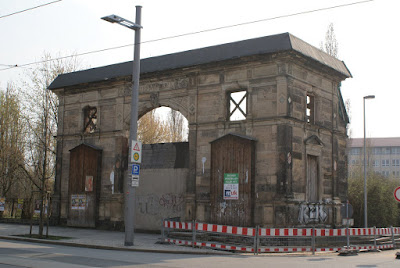 Posted by Elizabeth Hornbeck at 12:37 AM