(Happy Birthday to Me!) 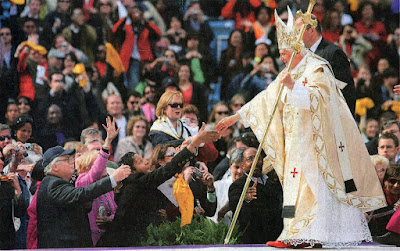 Not that I'm a big fan of the pope, but Dude has great shoes. This photo appeared in the NY Times on April 21, during the Pope's visit to New York City; kudos to the photographer (Chang W. Lee). It sort of makes the Pope look like he's levitating, or even walking on water (but Jesus didn't have red shoes). The composition of this image is nothing less than perfect; the pope, off-center, fills the right half of the picture frame, and the diagonal line of his outstretched arm and that of a fan is perfectly centered, with the meeting of hands at the horizontal and vertical center of the picture (sort of like in Michelangelo's "Creation of Adam"). This is Papal imagery at its finest -- and it's all about the imagery, the spectacle, isn't it? What I want to know is, does the Pope pick his own outfit, or is it all dictated by custom or even canon law? Does he always wear red shoes? I haven't witnessed men wearing red shoes with such confidence since I lived in Detroit. Surely a guy who can pull this off can bring about world peace...

I was at a doctor's office somewhere in the last few years and complimented a nurse's red shoes, and she told me she loves red shoes. At that moment I realized that I, too, love them, and in fact there are a number of people who share that love, including:

"O, I used to be disgusted,
and now I try to be amused.
But since their wings have gotten rusted,
You know the angels wanna wear my red shoes."
(Elvis Costello)
Posted by Elizabeth Hornbeck at 8:42 AM No comments: 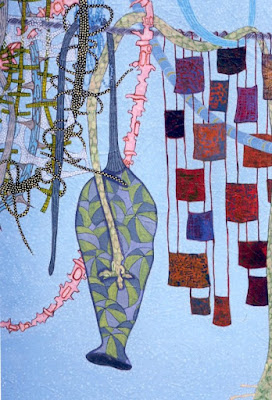 Laura Sharp Wilson has been very busy these days. She exhibited these two paintings at Friesen Gallery in Seattle in February 2008, in a one-woman show entitled "Twenty-Five Answers to One Question." The artist now lives in Olympia, Washington, with her husband and son, but she used to live in Columbia, Missouri, which is how we became friends. Her son is one month older than mine, and Laura started a small playgroup when they were just 2 or 3 months old. Laura and family left Columbia in December 2005, and I still really miss them a lot! 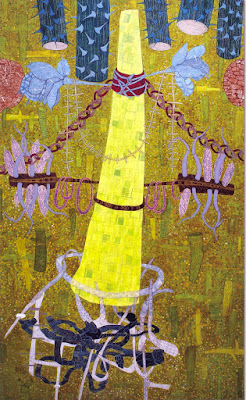 I've always loved Laura's paintings. Delicate, complex and detailed, they suggest some kind of alternative biological reality; they make me think of the kinds of organisms that you can't tell whether they are plant or animal. Is it an acquatic world? a primordial one? While the paintings are richly suggestive, they walk a fine line between the abstract and the representational. Laura's sense of color is striking, and the images are beautiful and poetic. Laura also creates sculptures. She describes her work this way:

"Moving to the Pacific Northwest has added a new vocabulary to my work. Trunk forms are in a number of paintings in this body of work. They represent trees that once grew in the wooded areas I now hike. The log, pole and trunk images speak to the history and foundation of the place I now live. My images are not likenesses of existing plant forms, instead, human culture has intervened, like the art of Japanese Ikebana, twisting, isolating and manipulating flora and stems into rare hybrids."

Laura has also been collaborating with other artists to call attention to issues they hold dear. She and fellow artist elin o'hara slavick co-curated an exhibit at Lump Gallery in Raleigh, North Carolina, which opened on April 4. The exhibition is called "Heroes," it brings together the work of 47 artists who each contribute "poetic, spontaneous, simple and honest tributes to those who inspire us; who refuse to fight the rich man’s war; who sing truth to power; who write manifestoes of hope; who lead and fight and refuse to let power corrupt; who help the hungry and sick and maimed and poor; visionaries; poets; artists; historians; doctors; activists; Rachel Corrie; Josh White; Frida Kahlo; Mother Jones; Paul Farmer; Ina May Gaskin." The idea behind the show, as explained in the Raleigh, N.C., Independent Weekly (April 4, 2008), was to focus attention on "heroes of all sorts," and hence to provide "glimmers of hope and resistance." 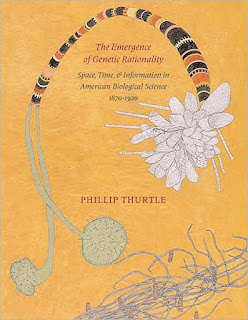 AND, check this out! Her art was used for the cover of a scholarly scientific book called Emergence of Genetic Rationality: Space, Time, & Information in American Biological Science, 1870-1920, by Phillip Thurtle, from the University of Washington Press, published in January 2008.

One of her paintings was also selected to illustrate The Fables of La Fontaine, compiled by Koren G. Christofides, University of Washington Press, 2006.
Posted by Elizabeth Hornbeck at 11:37 AM 2 comments:

Robert Smithson’s Spiral Jetty persists as an earthwork almost 4 decades after it was created, sculpted from the earth, jutting out into the Great Salt Lake. It has fluctuated with the changing water level – it was submerged for more than 20 years – and the accretion of salt deposits. For those who’ve never heard of earthworks, this was an unconventional artistic medium popular in the 1960s, one that defied the norms of the commercial art world that regarded art as a commodity.

Spiral Jetty is also a movie, a documentary film that is more than documentary, it is a work of art in its own right. In 1970, Smithson and his wife Nancy Holt, with some friends and supporters, created this fascinating 35-minute film that adds new dimensions to the earthwork and reveals some of the artist’s more esoteric points of reference. The film informs the earthwork to such an extent that the earthwork seems incomplete without it.

The earthwork spirals out into the lake, suggesting movement; the film, on the other hand, simulates that movement in a dizzying, almost nauseating centrifugal journey, tracing that earth-spiral from the air, by helicopter, while Smithson repeats his mantra “mud, salt crystals, rocks, wat

er” for each of the jetty’s directional coordinates. The camera, from the helicopter, also follows Smithson as he runs along the jetty, showing us the artist’s seeming intention that the work is to be experienced physically, in three, even four dimensions, not simply to be looked at in photographs (which is how 99 percent of viewers have experienced it).

Another fascinating aspect of the film was its extended, slow tracking shots through a paleontological museum, with dinosaur bones and reconstructions of dinosaurs and pictures of dinosaurs, all filtered red as if the past could be viewed better through some kind of an infrared eye. The soundtrack for the paleontology segment was a muffled drone, like something heard under water.

The editing work contributes both to the visual pleasure of the film and the conceptual links that Smithson makes between machines and dinosaurs. Scenes of the dusty road, shot from the moving vehicle, are intercut with those slow tracking shots in the museum with its bones in glass cases, as well as the large earth-moving machines as they put the boulders and other sediment into place on the jetty.

In his own statements about the film, Smithson explained some of these connections between his work on the Spiral Jetty and his interest in paleontology:

“Back in New York, the urban desert, I contacted Bob Fiore and Barbara Jarvis and asked them to help me put my movie together. The movie began as a set of disconnections, a bramble of stabilized fragments taken from things obscure and fluid, ingredients trapped in a succession of frames, a stream of viscosities both still and moving. And the movie editor, bending over such a chaos of ‘takes’ resembles a paleontologist sorting out glimpses of a world not yet together, a land that has yet to come to completion, a span of time unfinished, a spaceless limbo on some spiral reels. Film strips hung from the cutter’s rack, bits and pieces of Utah, out-takes overexposed and underexposed, masses of impenetrable material. The sun, the spiral, the salt buried in lengths of footage. Everything about movies and moviemaking is archaic and crude. One is transported by this Archeozoic medium into the earliest known geological eras. The movieola becomes a ‘time machine’ that transforms trucks into dinosaurs.” (My thanks to John Klein for bringing this statement to my attention.)

I love this statement, especially the end; it’s very Flintstones, isn’t it? Seriously, Smithson’s statement shows great insight into the filmmaking process, and his reference to the “spiral reels” of the filmstrip underscores even more the Spiral Jetty’s (i.e., the earthwork’s) being best understood as a dynamic gesture through the dimension of time, just like film itself.

The film was non-narrative in its exposition. Contrast that with the 2003 documentary about artist Andy Goldsworthy, Rivers and Tides, which was beautiful yet very conventional and straightforward in its emphasis on episodic narration. Both of these artists enjoy watching the transitory effects which nature exerts on their creations. In that respect Goldsworthy’s art appears similar to Smithson’s, but in fact I think it’s much more romantic in its love of nature. Smithson, on the other hand, loved machines as much as he loved nature.

I enjoyed this film so much that I've decided to use it in my Art History / Film Studies class this fall, "Artists Lives on Film." The last time I taught the course I used only biopics, but this time I plan to show a few documentaries and a few films made by artists as well.

For more information on Smithson, who died in 1973, visit his website.

(Viewed at a screening of the film in the Art History department on April 8; the department helped purchase a copy of this film for MU on DVD, which is available through Academic Support.)
Posted by Elizabeth Hornbeck at 10:21 PM No comments:

Okay, well, we had book group last night and someone who didn't read the book said she planned to just read about it on my blog tomorrow. I wasn't planning to write about it, but since the hostess, DL, sent me the following link I thought I'd put up the link and at least say something.

The author, Justine Levy, was interviewed by Sheelah Kolhatkar in The New York Observer on October 2, 2005. Good interview, albeit a little outdated; it reports that the evil "other woman" is married to Justine's ex-husband and they have a child. But by now, as we all know, she has moved on and is the first lady of France.

JM just sent me this link to a video of Levy's interview with Charlie Rose. (The video is 10 minutes long.) In this interview she states that she is a nicer version of the book's narrator, which was reassuring to hear!

Opinions of the novel at book group were mixed; personally I have been enjoying it (I still have 2 chapters left to go), and even though most readers don't like the narrator (she's a shallow, speed-addicted, spoiled rich girl-child), I have to agree with DL that she is very honest, and that is an endearing quality. Not to be snarky, but I liked her a WHOLE lot better than Elizabeth Gilbert, the author of the memoir Eat, Pray, Love that we read in book group last summer!

Despite being a child of privilege -- the daughter of a celebrity intellectual -- she did have a pretty messed-up childhood, caught between her divorced parents; so did her nasty ex-husband, also a son of celebrity intellectuals. I guess the book shows that no matter how privileged a life appears from the outside, it might not be all it's cracked up to be.

(Warning for authors: just hope that your book manuscript doesn't end up in the hands of an extremely depressed, recently divorced editor!!)

By the way, I was relieved to learn from that New York Observer interview that Justine Levy now has a daughter with her new lover; after reading about her tragic abortion it is such a relief!
Posted by Elizabeth Hornbeck at 8:00 AM No comments: