Seen from a bus in Dresden: 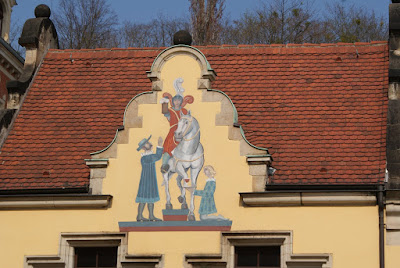 This is the decorative front gable of a tavern. It shows a knight on horseback; on one side a pageboy of some sort kneels, offering him a glass of wine. On the other, a burgher-type man has handed the knight a glass of beer. The knight hoists the beer glass aloft, as if toasting us before he imbibes. The clear message: drink beer, not wine.

Subtler messages: beer is German, and beer is associated with the burgher class (middle to upper middle class). Is this a rejection of the upper classes (the aristocracy implied by the pageboy). Is it a rejection of French culture? (The pageboy's garb looks vaguely French to me.) I don't know -- but I was so intrigued by it that I got off the bus to take a picture.
Posted by Elizabeth Hornbeck at 1:21 PM