Our most recent Book Group selection was Persepolis, a graphic novel by Marjane Satrapi and, having chosen the book, I was pleased that people responded well to it. Although one person at the meeting said "it's not literature," the graphic novel as a literary form has matured to the point where some pretty powerful and significant expression (both literary and visual) takes place within its pages.

I believe the first such appearance of the graphic novel was Art Spiegelman's Maus: A Survivor's Tale, an incredibly smart book about the Holocaust and about his family's post-Holocaust experiences. For those unfamiliar with it, I recommend the Wikipedia entry on Maus, which does an excellent job of explaining the book's significance, depth, and creativity. Maus appeared in various formats beginning in 1973. Other important graphic novelists include Alison Bechdel (author of the graphic novel Fun Home and the comic strip Dykes to Watch Out For); and Harvey Pekar (author of the American Splendor series, which is illustrated by various artists including Robert Crumb, Alison Bechdel, Columbia, Missouri artist Frank Stack, and numerous others). All of these examples are autobiographical in their subject matter, which seems to be a pretty significant factor in separating the "serious" graphic novel from its pop counterparts. [Many thanks to my friend Brad who helped me to compile this list, though I take full responsibility for the opinions contained herein.]

As for Satrapi's graphic novel, it makes the history and experience of revolutionary Iran accessible to a wide audience, dispelling Western stereotypes of Iranians as religious fundamentalists. (The hostage crisis, of course, planted the seeds for a lot of American hostility.) Having lived in Los Angeles for 14 years, where I could witness the Iranian exile community first-hand (since Southern California has the largest Iranian population outside of Tehran), I knew these stereotypes were untrue, but the book reminded me again of the tragic loss of a culture and civilization that Iranians have experienced. 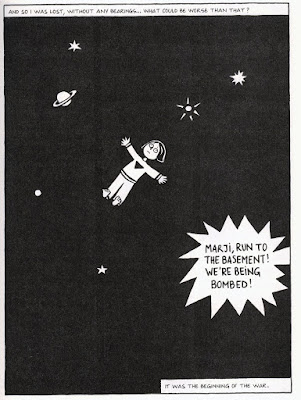 Satrapi was 10 years old when the Iranian Revolution occurred, and her vivid recollections of her childhood are magically illustrated, capturing both the universal psychological experience of childhood and the trauma of growing up during some of the biggest upheavals imagineable.

After living abroad during her high school years, Satrapi returned to Iran, where she attended art school. As a cartoonist her images are simple yet convincing; I like how she varies the size and dimension of panels to avoid visual monotony. Then there are those things that cannot be expressed either in words or in pictures, as for instance in this very powerful page of the novel: 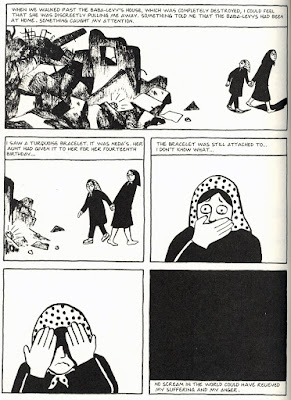 Satrapi's friend, a girl who lived across the street from her, was killed when an Iraqi bomb destroyed her apartment building. In the final panel, instead of pictures we see a completely black box with the caption "No scream in the world could have relieved my suffering and my anger." Notice too the stylistic difference between the rubble of a bombed-out building in the top panel, rendered with lots of shading and less stylization, compared with the mostly unmodulated areas of black and white of her other drawings. I see this as a rare gesture towards realism that underscores the emotional impact of the incident being represented.
Satrapi injects a lot of humor, though, in this sad history of her country. I enjoyed the encounter between Descartes and Karl Marx:

And the comparison between Marx and God:

Satrapi is critical of the West as much as of her own country. Her husband wants to emigrate to Europe because he's sick of Iran; he tells her, "You'll see, a year from now people will disgust you. Always interfering in things that don't concern them." Her reply, based on her own experience of living in Vienna: "Maybe so, but in the West you can collapse in the street and noone will give you a hand." (I should mention that Satrapi now lives and works in Paris.)
Her sophisticated humor reveals the high intellectuality of her family and her society; from her wise and defiant parents, her revolutionary uncle and her strong but loving grandmother, Satrapi eventually learns how to live up to the ideals that they represent. Through this graphic novel / memoir, a portrait emerges of a very smart, sophisticated, and painfully honest woman who's not always likeable, but is always compelling.
Postscript:
I've noticed lately that there are a spate of books by Iranian expatriates of my generation, who evidently are all coming into their own as writers; others that spring to mind are Funny in Farsi: A Memoir of Growing up Iranian in America, by Firoozeh Dumas, and Lipstick Jihad: A Memoir of Growing Up Iranian in America and American in Iran, by Azadeh Moaveni. I'm please to see that their stories are finally being told.
Posted by Elizabeth Hornbeck at 8:32 AM