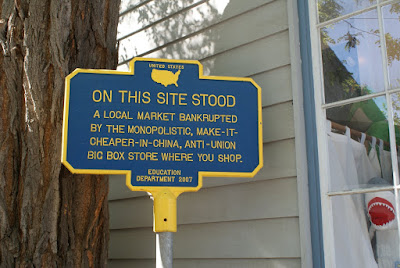 Today I walked past this sign on Tinker Street in downtown Woodstock and realized I had never noticed it before. The last time I was in town was 9 months ago, and since the sign is dated 2007, maybe it wasn't even up then.

I've been in Woodstock for 5 days now, and have been wondering what photo to post on my blog -- the scenic view of the Catskills? the Tibetan Buddhist monastery? the family home built by my great-grandfather in 1951? But really, this sign says it all.

I've been coming to Woodstock on a more-or-less annual basis since the 1970s, when my grandmother, after becoming a widow and traveling around the world with her daughter, moved back up here to be near her mother.

My impression of Woodstock growing up was that there were three categories of people here: artists, senior citizens, and tourists. Of course there were also the hippies, bikers, and other "alternative" people, but mostly they fit into one (or more) of the aforementioned categories. Then there were the summer-only residents; the ones I met were artists; these folks tended to live in "the city" the rest of the time. In my adulthood I realized there are also the merchants who keep the town running -- the meat market, the florist, the wine merchant, the bookseller, the town's two hardware stores. Woodstock has its middle-class, working-class, middle-aged and young adults, and families -- all in sufficient numbers to support public schools, a town council, a police department, and a volunteer fire department.

But most of the businesses that line the mile-long "downtown" cater to affluent tourists. The clothing, jewelry, objets d'arts, and assorted baubles and trinkets from distant lands -- none of these qualify as necessities for the town's residents. My grandmother, when she needs to buy a pair of jeans or comfy shoes (which is rare), drives to Kingston to shop at Sears or some other place she considers reasonably priced. With all the senior citizens in Woodstock, you'd think there would be more affordable shops in town, but there aren't. Even the Grand Union grocery store -- walking distance from my grandmother's house -- closed down several years back, leaving Woodstock with only a health food store for its grocery needs. (Well, the meat market and the drugstore both stock a lot of staple items too.) Me, I like the health food store. My grandmother, on the other hand, thinks it's too expensive; she has to go three miles to Hurley to shop at the Hurley Ridge market (which, mind you, is NOT a chain or big-box store).

Getting back to the photograph: I don't believe that this sign ("ON THIS SITE STOOD A LOCAL MARKET BANKRUPTED BY...") commemorates any actual market that ever really existed on this spot. (Notice that it doesn't give the name of that local market.) I could be wrong, but I seem to recall that the two adjacent buildings have always housed locally owned businesses of one sort or another. I think the sign is there for polemical purposes, decrying this country's economic and political state of affairs more than anything else. The "in-your-face," accusatory tone -- assailing any and all passers-by -- is very much in the vein of Woodstock's local rhetoric. When I walk past the stream between my grandmother's house and the town, locals have posted signs admonishing visitors not to pollute or leave garbage because "this site is sacred to many people around here." The implicit message: you are an outsider; you are welcome only if you respect and share our values.

I cannot believe that the stores in Woodstock suffer from competition from any big-box stores; they just do not share the same customer base. Woodstock caters to the high-end, and the locals who want lower prices have always looked to Kingston and other local mini-opolises for their shopping. This is not a new phenomenon of the advent of Wal-mart. I wouldn't even know where to find a Wal-mart in this part of the country.

But the sign makes a great conversation piece. When I took this photo yesterday I was not the only person doing so.

Special thanks to my friend A.E. for sending me a link to Emily Gould's NY Times article, "Exposed." The author discusses the pitfalls of oversharing on the internet.
Posted by Elizabeth Hornbeck at 10:43 PM