The Architecture of Happiness by Alain de Botton (book review) 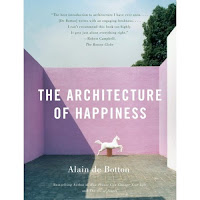 Today I started reading The Architecture of Happiness by Alain de Botton (2006). It’s an impressive, expansive text about the emotional and psychological impact of architecture and the man-made environment – and ultimately of beauty itself – on us human beings. I’m enjoying this book immensely; it makes reference to lots of writers, intellectuals, and artists, displaying the author’s breadth of interests. The best part of the book are the images – he shows everything from Mies van der Rohe’s Tugendhat House in Prague to Botticelli’s Madonna and Child with Eight Singing Angels – and that’s just in the first chapter. His book uses images to communicate visually in a manner that almost stands independent from the text, much like Le Corbusier’s Vers une architecture (Towards a New Architecture) or Robert Venturi’s Complexity and Contradiction in Architecture.

Unlike Venturi or Le Corbusier, Botton is not an architect. Nor is he an architectural historian, or an academic of any sort. He seems to be just a smart guy who writes mass-market books for an intellectual audience on such esoteric subjects as literature, status, travel, architecture, and love. He also writes novels. So I guess he’s just a writer; or is he an independent scholar, or a public intellectual? And where are the boundaries between those categories? Anyway, here’s an excerpt from the first chapter of The Architecture of Happiness:

“The house has grown into a knowledgeable witness. It has been party to early seductions, it has watched homework being written, it has observed swaddled babies freshly arrived from hospital, it has been surprised in the middle of the night by whispered conferences in the kitchen. It has experienced winter evenings when its windows were as cold as bags of frozen peas and midsummer dusks when its brick walls held the warmth of newly baked bread.

It has provided not only physical but also psychological sanctuary. It has been a guardian of identity. Over the years, its owners have returned from periods away and, looking around them, remembered who they were.”

I think the same might be said about the cities and towns we call home.
Posted by Elizabeth Hornbeck at 7:49 PM