Friday, May 22
On our third night in Sevilla – Ascension Day – my husband and I found ourselves sitting in a small plaza (a plazuela) drinking wine and listening to a local band playing British rock and pop songs of the 50s and 60s – in English. They started with The Who (“The Kids Are Alright”) and moved on from there to Monkees, Beatles, Byrds, and similar standards. The scene was great for people-watching, and made me glad I had found us an apartment outside of the tourist core of the city, in a neighborhood on the other side of the Guadalquiver river called Triana. As far as we could tell the crowd was all locals; it was a very family-oriented scene, with a couple dozen kids (of all ages) running around and playing with each other in the midst of the adults partying and drinking. The Spanish kids were up past 11 p.m.; our little guy had already been asleep for a couple hours, and was being babysat by my mom in the apartment.

On the stage behind the band was a large cross decorated with white tissue-paper flowers for Ascension Day. N. observed that from looking at the stage you’d think it was a Christian rock band. The second act was a singer from Mexico with a large embroidered black hat; he was singing along to the accompaniment of a tape. He spoke Spanish really fast, a lot faster than the Spanish people talk. We felt a bit nostalgic, and a common bond as fellow Norte Americanos. We have a running joke that every Mexican song has the word “corazón” (“heart”) in it, and this guy sang about his corazón right away. (I have to admit, as much as I am enjoying Spain, I like Mexico better.)

The third act was a duo of Spaniards singing flamenco music and playing guitar; every song had the word Triana in it (“our” neighborhood in Sevilla). By this point we still hadn’t finished our bottle of wine, but were ready to go home anyway. It was a bit chilly, as we have discovered Spain can be in the evenings. We only had to walk about three blocks back to the apartment through very narrow streets. We had stumbled onto this celebration completely by accident, just by following our ears, and it felt like a real find. 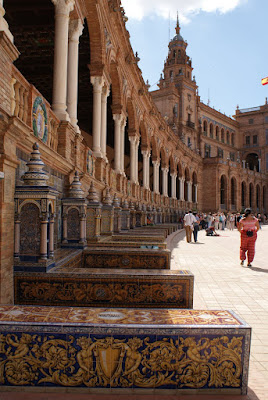 (Photo: Plaza de España in Seville, built for the 1929 Ibero-American Exposition and recently restored)
The Triana neighborhood continues to treat us well. We had dinner at a tapas restaurant just a couple blocks from our apartment, which was one of the best meals we’ve had in Spain. The appetizer – a specialty of the house – was slices of grilled eggplant topped with a somewhat sweet red sauce that tasted like a puréed roasted red pepper; and some kind of yummy cheese on top. Then tapas-sized portions of three kinds of fish, followed by a veggie course. The latter course included a dish called salmorejo, a spread that is indeed pinkish in color (like salmon) but is reminiscent of hummus or some sort of ground legumes (but consisting mainly of tomatoes – roasted? – and bread crumbs to thicken it) with lots of olive oil and other delightful flavors. (Olive oil has been a major component of most dishes we’ve eaten in Spain.)

Because it was the Ascension Day weekend, we happened into a religious procession on our walk to dinner around 9 p.m. – a large coffin-like “float” with an empty cross on top of it, followed by a brass-and-percussion band playing some rather dirge-like music. My mom and my son both had to cover their ears, they said it was too loud for them. We had to wait for the procession to pass before we could cross the street to go to dinner. The “float” was funny because it was being carried by about 20 people, but you couldn’t see the people (except for their feet), they were hidden by the cloths draped from the bottom of the float. Then after dinner there was another such procession, apparently sponsored by a different church.

Now here’s the funny thing about these religious processions – you always hear about them happening in heavily Catholic countries, and about tourists flocking to see them at the proper times of the year. But what I noticed in Seville was that the town does not come to a stop so that everyone can take part; instead, it’s as if the vast majority of the populace takes no notice. A block away, on the major artery through the neighborhood, the buses were still running, people were still walking along carrying their parcels and heading to their destinations; traffic was still heavy. Granted, these were tiny processions we witnessed, but it gave me a different perspective on the phenomenon. 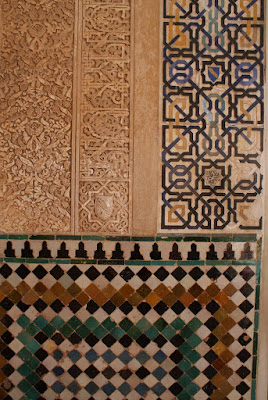 This was our day to see the Alhambra! While touring the Nasrid Palace, which is the gorgeous Islamic architectural heart of the entire site, I discovered that the American author Washington Irving had actually gotten to LIVE there. What a privilege. It turns out that in addition to being the first American novelist to acquire an international reputation, he was also a diplomat (ambassador, maybe?) to Spain. Here he wrote Tales of the Alhambra; I bought a copy, maybe someday I'll get a chance to read it. In the meantime, here are some photos: 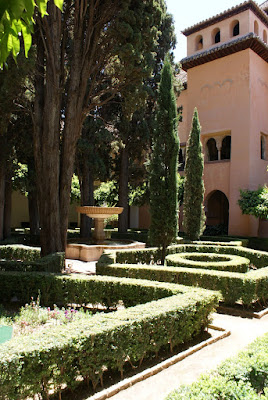 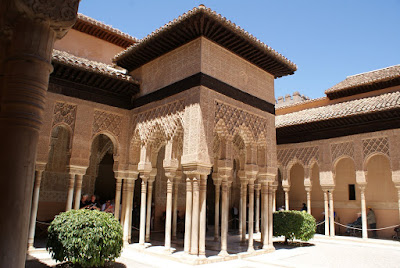 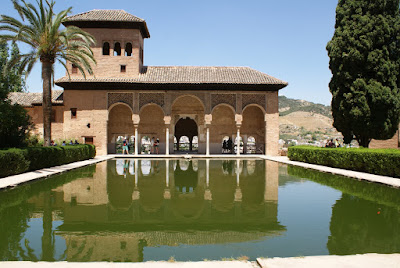 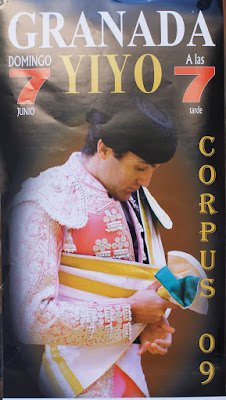 We are on a train to Madrid, having spent time in Sevilla, Córdoba, and Granada. Sevilla was my favorite place, and I’m dying to go back. My husband’s favorite place was Córdoba, which was just a day trip from Sevilla, and was a beautiful, quiet city. What I liked most about it – besides the AMAZING mosque-turned-cathedral, which was my main reason for going to Córdoba – was the Roman legacy, which I knew nothing about ahead of time. My mom’s favorite place was Granada, in part because of the cooler climate there. And the Alhambra, of course, impressed the heck out of all of us.

My son’s favorite part of Spain so far has been the zoo in Córdoba, but once we go to the zoo in Madrid I think he’ll decide he likes it better – it’s much larger. A few days ago he said, “I’m going to go to every zoo in the world before I die.” He’s on track to do it, too; this year he’s been to two zoos in Berlin (multiple times each) and zoos in Dresden and Hamburg.

One thing I can’t relate to in Spanish culture is the bullfighting obsession. Bullfighters are the rock stars of Spain, the sex symbols featured in posters on the street. They have great costumes; it’s all about spectacle and pageantry. But I just feel sorry for the bulls. Notice how the bullfighter's cape looks a lot like a cardinal's cape (which is also all about spectacle). 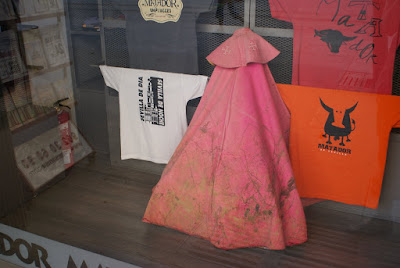 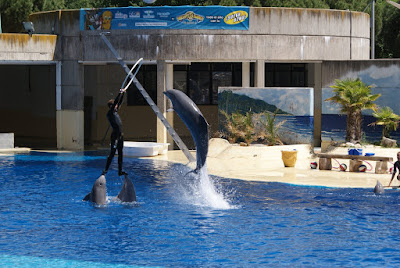 Yesterday we helped my son get one step closer to his goal of seeing all the zoos in the world. We spent the whole day at the Madrid zoo (without my husband, who left for Berlin yesterday morning). It was a fantastic and memorable visit; we got to see a dolphin show, which was the first one my son has ever been to. I think they had 8 or 9 dolphins performing. It was accompanied by very loud Spanish pop music, and hundreds of Spanish school children clapping along. We also got to see a sea lion show, also a lot of fun.

Weirdly the zoo was full of large groups, mostly local kids (around junior high age or younger) on school field trips. Whoever thought 50 kids crowding to look at one animal was a good idea must have been crazy. These crowds were a bit unpleasant, but they moved quickly so it wasn’t too hard to avoid them; and by the afternoon they were mostly gone.

Today we went to the Prado Museum, which blew my mind. This was one of my top two reasons for coming to Spain (the other being the Alhambra), and I’d been wanting to see the Prado for years and years and years. I mostly was awed by the Goya rooms and the Titian rooms; didn’t get to see Velasquez yet, but WILL go back for more. A single room of 18th-century French portraiture was pretty cool too (no postcards available).

Posted by Elizabeth Hornbeck at 8:41 PM