Completed in 1949, the Soviet monument in Treptower Park, Berlin, was the largest Soviet World War II monument in the world -- both within and outside of the Soviet Union -- until 1967, when a larger one was constructed in Volgograd, Russia. Located in the former East Berlin, the Soviet monument draws huge crowds of Russian tourists; we spent the afternoon there today, and every conversation I overheard was in Russian. Flowers left in tribute to the dead are everywhere, fresh ones, revealing the importance this monument has for so many people. 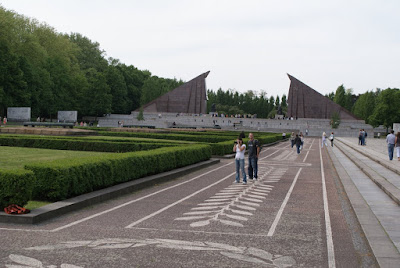 May 8, 1945, marked the end of the Second World War and is celebrated in Europe as Victory in Europe Day. In the former East Germany it was celebrated as Tag der Befreihung (Day of Liberation). The fact that we visited the memorial on the weekend of this momentous anniversary was purely coincidental, and serendipitous. 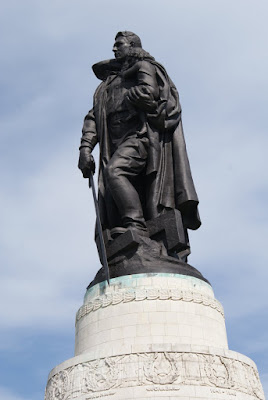 The memorial honors the Soviet liberation of Berlin. Its monumentality seems over the top, but is appropriate considering the number of graves it represents. 5,000 Russian soldiers who died in the liberation are buried under the 5 lawns that lie between the two red granite walls (symbolizing flags lowered in mourning) and the 38-foot-high statue of a Russian soldier, with a German child in one arm, trampling the swastika symbol of the Third Reich underfoot and under sword. 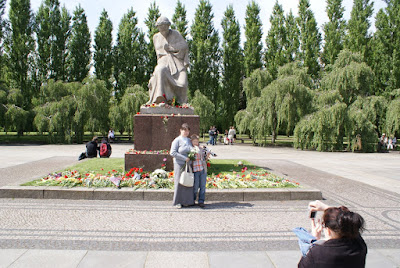 On the approach to the monument is the statue representing Mother Homeland, sculpted from a single 50-ton granite rock. White granite is used to create the cylindrical mausoleum that serves as the base of the statue, as well as 14 massive symbolic sarcophagi; this Swedish granite had been stored by the Nazis to be used to construct a triumphal arch in Moscow. (Talk about counting your chickens...) 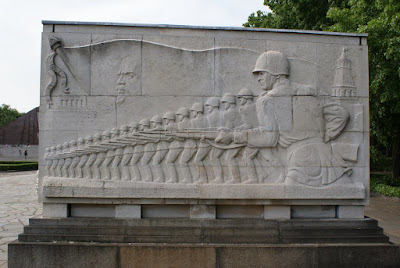 The sarcophagi are media for Social Realist relief sculpture representing Germans, oppressed by Fascism, and Russians, their heroic saviors. Quotes by Stalin are engraved at the ends of the sarchophagi. 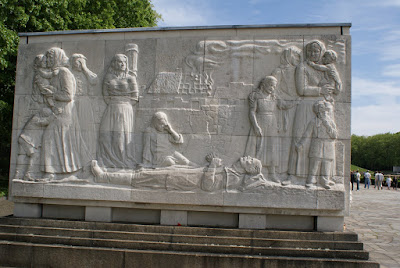 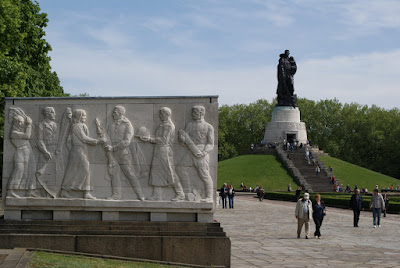 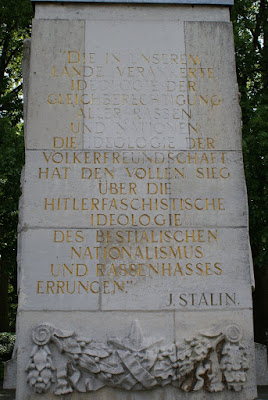 “Our ideology, anchored in our soil, of equal rights of all races and nations, the ideology of friendship among peoples, has achieved total victory over the Hitler-Fascist ideology of bestial nationalism and racial hatred.” – Joseph Stalin

(Hopefully further comment on my part about the irony of Stalin's statement -- who killed or exiled as many people as the Nazis did -- is unnecessary, propaganda being instantly recognizable to most people.)
Posted by Elizabeth Hornbeck at 2:18 PM