Battle Between Lent and Mardi Gras 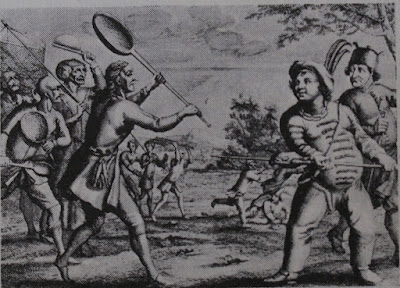 The battle between Carême (Lent) and Mardi Gras (from a 17th-century print).
Source: Larousse Gastronomique, 1961

I found a copy of the Larousse Gastronomique at my grandmother's house in Woodstock when I was visiting last month, and she generously gave it to me. I am in love with this book! My favorite genre of books (one of them, anyway) is books pertaining to food, which includes cookbooks and reference books on the subject. The Larousse Gastronomique is one of the most wide-ranging encyclopedias on food, food history, and food preparation ever published. I love it because reading about food is really reading about culture. Imagine 20 encyclopedia pages on "Offal" -- every type of "variety meats" and how to prepare them.

Since Mardi Gras is almost upon us, I bring you this entry on Lent from the Larousse Gastronomique:

Forty days fast imposed by the Catholic religion, from Ash Wednesday till Easter. This period of fasting in the early Church had excellent physical effects by imposing on the digestive system, worn out by gastronomic excess during the winter season, a salutary rest.

Brillat-Savarin tells us that towards the middle of the eighteenth century the normal regime in bourgeois families consisted of four meals:

Breakfast, taking place before nine in the morning, consisting of bread, cheese, fruit, sometimes a pâté or cold meat. (The habit of drinking coffee had not yet penetrated into provincial life.)

Dinner, which took place between twelve and one, with soup, the boiled meat of the pot-au-feu, with vegetable accompaniments according to the season.

Around four o'clock there was a light meal enjoyed as a rule by the ladies of the household and the children.

Supper was at eight o'clock, with entree, roast, side dishes, salad and dessert.

During Lent breakfast was suppressed, meat was excluded from the menu at dinner, and in the evening supper was replaced by a meal which contained no eggs, butter, or anything of a live nature.