Kiss Me and Smile For Me 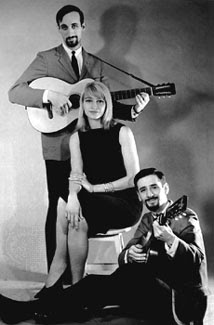 Mary Travers of Peter, Paul and Mary died on September 16, 2009, at the age of 72. She was born in 1936 in Louisville, Kentucky, which is also my hometown. Driving home from Louisville today after spending the Thanksgiving holiday with my family, we listened to a Peter, Paul and Mary "greatest hits" tape, and the song "Leavin' on a Jet Plane" brought back some memories. "Leavin' on a Jet Plane" was the first pop song I remember hearing and loving, and wanting to hear over and over, and learning the words so I could sing along. Surely I must have heard other songs on the radio (remember "If you want it, here it is, come and get it" - my brother and I kept asking my mom what "it" was), but 40 years later this one still stands out as my "first."

Peter, Paul and Mary's version of "Leavin' on a Jet Plane" (written by John Denver) became a radio hit in 1969; that was the year my parents divorced. I didn't realize until much later that the song's blend of heartache, remorse, and desire resonated with me because of my own loss.

My parents' divorce was the end of my childhood. I was five years old when they split up, maybe six, I don't remember exactly. I remember my life before the divorce in idealized terms - I know it wasn't a happy time for my parents, but for me it was the happiest time of my life, when I had no problems, no cares. My family was my universe, and when it fell apart, I knew real pain for the first time in my life.

Mary Travers gave a voice to my pain and longing. If the divorce was the end of my childhood, then pop music was the beginning of my adulthood. I'm not sure that was a good thing. Don't get me wrong, I love pop music - it's fun, and it can create beauty out of the banal or even the ugly. At the same time, though, it provides formulas. For me, this formula meant that a romantic relationship (preferably heterosexual, definitely monogamous) defined the ultimate terms of love, desire, and loss. Never mind that it was my parents' divorce that created my tragedy; finding a husband became the prescription to cure it. (Or at least, finding a boyfriend.) To make myself perfectly clear, I don't feel that this is a positive benefit of pop music; it may even be harmful. But I still love "Leavin' on a Jet Plane."

I don't mean to make too much out of this. One song is not going to have that much influence on anyone's life, it's part of a much larger and much more complex culture. It's just funny to me, when I hear that song, to think back on my 6-year-old self (in 1970) and my 4-year-old brother being so moved by it at such a young age that it could almost make us cry. Where did that impulse come from? It had to come from something outside the music -- the emotional devastation of having our family broken apart. When I say pop music was the beginning of adulthood for me, I guess what I mean is the ability to find some hidden meaning to a song.

My four-year-old son still thinks that "Bungle in the Jungle" is just about animals; I hope it stays that way for a long time.

Now the time has come to leave you,
One more time, let me kiss you,
Then close your eyes, I'll be on my way...
Posted by Elizabeth Hornbeck at 11:11 PM