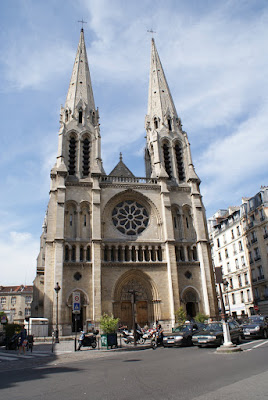 As an architectural historian I am, of course, interested in buildings. Additionally, though, I’m intrigued by the representations of buildings in architecture and art, which occur more frequently in medieval times than in other periods. (See my blog entry on the Church of St. Denis in Paris.) One delightful small Gothic church in Paris is the Church of Saint Jean-Baptiste de Belleville, which is in the area of Paris known as Belleville. More on Belleville later – first the church.

According to one architectural historian, “From 1050 to 1350, more stone was quarried and moved in France than at any time in ancient Egypt” (Erlande-Brandenberg, Cathedrals and Castles: Building in the Middle Ages, p. 33). And it’s true – wherever you go in France, including all around the city of Paris, you will see countless versions of the Romanesque and Gothic styles, executed on every imaginable scale from the monumental cathedrals to the small parish churches. (The Church of Saint Jean-Baptiste de Belleville is quite a bit later than 1350, though I don’t know exactly when it was built.) 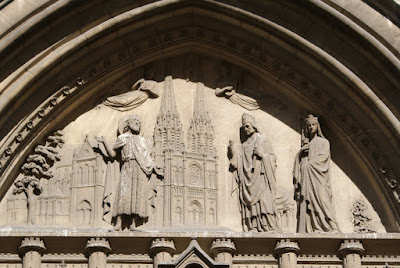 What struck me most about Saint Jean-Baptiste is this amazing representation of the church within one of the church’s own tympana. (The tympanum is the semi-circular area above a church door, which is nearly always filled in with architectural sculpture.) Here you can see the saint, John the Baptist, standing in front of the church that bears his name. He’s barefoot, an iconographic indication that it is in fact John the Baptist; to the right are two figures who look to me like a bishop and the Virgin Mary. The church in this image is an exact representation of the building, with its two pointed towers in front. Two angels fill the sky on either side of the church. 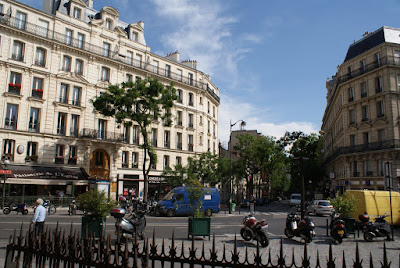 This church serves the diocese of Belleville, which is an interesting community in itself. There are many parts of Paris that feel like a village; Montmartre is only the most famous, which many people might know only from the film Amalie. Belleville is also like a village, and the Church of Saint Jean-Baptiste sits on a beautiful little square looking out over the neighborhood pastry shops and restaurants. It’s a nice place to walk around, which I know from the experience of having lived here for 4 months in 1996 and again for about 6 weeks in 1999. (My Parisian friend lives in Belleville.) 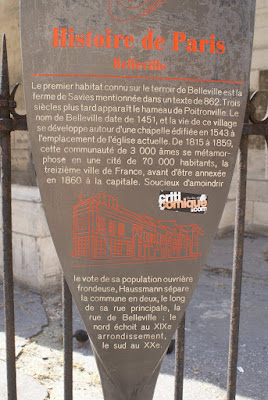 A historic marker tells us that “Between 1815 and 1859, this community of 3,000 souls metamorphosed into a city of 70,000 inhabitants, making it the third-largest city in France, before being annexed in 1860 into the capital.” Baron Haussmann, who redesigned Paris under Napoleon III and in the process wreaked havoc on its populace, split Belleville into two parts, so it now constitutes the 19th AND the 20th arrondissements in Paris. This split was a deliberate political move intended to “divide and conquer,” so to speak; Belleville had an enormous population of working-class folks who might have been too powerful had they remained an intact political (voting) unit.

Belleville still retains much of its working-class character, despite pastry shops selling some of the gorgeous 5 € confections for which Paris is famous. (Personally I find them too beautiful to eat – and usually not as tasty as they are wonderful to look at. I prefer the simple 2 € chocolate éclair.) Belleville is still home to a lot of immigrants, chiefly Arabs and Chinese. Since my previous visit 10 years ago, though, Belleville is starting to get a bit gentrified; my friend calls it “bobo” – bourgeois bohemian – which is apt. On top of all those identities – working-class, immigrant, bobo – coming to Belleville feels almost like being in the country, because of the vast Parc de Butte-Chaumont. Belleville does not have the enormous crowds of tourists one finds in the Marais or the Latin Quarter; there’s more peace and quiet here. (The drawback to that is the long commute to the center of the city if you have to visit libraries and archives.) Still, I love Belleville, and couldn’t imagine a trip to Paris without spending time here.
Posted by Elizabeth Hornbeck at 4:22 AM