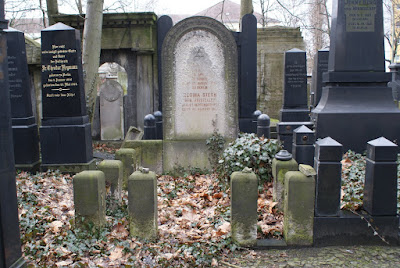 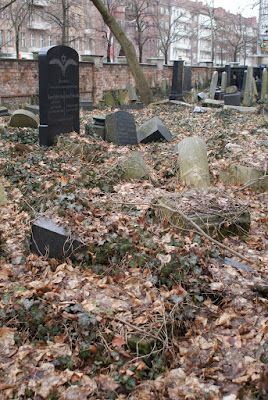 The Jewish cemetery in our neighborhood opened in 1827 to replace the earlier one, which opened in 1672 and closed in 1827 (and was obliterated by the Nazis in 1943). People were buried here from 1827 to 1942. This cemetery is quite close to us, and was thankfully NOT obliterated by the Nazis, but there is very little information that I can find about it, especially nothing to explain why a fairly large tract of it (maybe 10 to 20 percent) is in ruins and appears to have been deliberately vandalized.

There is a well where people were hiding to avoid the draft during the Second World War; they were discovered and executed by the SS here in the cemetery. (They were Gentiles, of course; there were no Jews left in Berlin by this time, and even if there had been, they wouldn’t have been able to serve in the German military.) 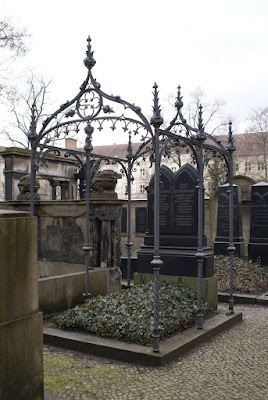 Most of the graves are not vandalized and seem well tended. There are some pretty impressive family mausoleums, many of them incorporating classical architectural motifs, and some even use Gothic designs (which surprised me because I’ve always thought of the Gothic style as specifically Christian). 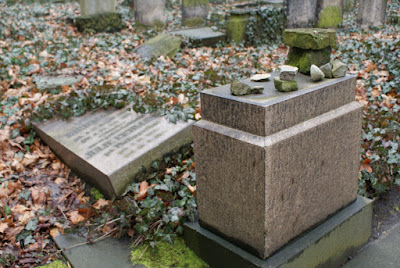 One thing I saw for the first time was the Jewish custom of placing stones on top of the grave marker. Most of the graves had stones piled on them; I’m told that it has something to do with simply indicating that the grave has been visited. I asked my grandmother's Jewish cousin about it, and she wrote, "I have always known that we put stones on the graves of Jews as a sign that we are thinking of the one who has passed away. I do not know the origin of the custom, though." 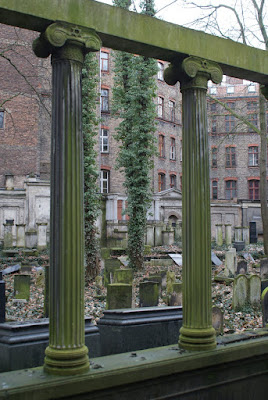 Another Jewish friend of mine said that "it was always explained to me that they were an indication that the grave had been visited. Since graveyeards are often filled with loose stones, it's an easy way to mark that a loved one or loved ones had been there. I do, however, like this explanation, which was one of the first I saw when looking for explanations on-line: 'An early Midrash Lekah Tov (also known as Pesikta Zutra) 35:20 relates that each of Jacob's sons took a stone and put it on Rachel's grave to make up Rachel's tomb. Here and elsewhere we learn that by placing stones on the grave one participates in building the tombstone. We do not find any direct connection with our present practice, but we might ask if this is an ancient memory of this tradition.' That is to say, everyone participates in building the grave by adding the small stones to it, which isn't a bad explanation and here has a Talmudic source."

NOT the Jewish Cemetery, but the Tierpark (the East Berlin zoo): 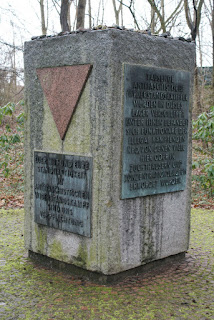 The Jewish practice of placing stones on a grave extends not only to graves, but also to memorials like this one dedicated to the Wulheide Concentration Camp. This memorial is in the Tierpark, which is the East Berlin zoo that was created when the original Berlin Zoo ended up in the West. This memorial does not mention Jewish victims of the Holocaust (or Shoa as it is called in Hebrew), but the stones on top of it speak to that omission. 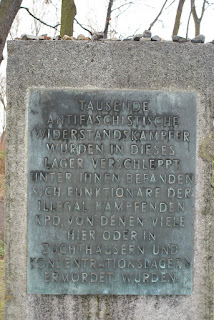 The inscription on the memorial talks about the “thousands of freedom fighters” who were members of the illegal Communist Party (which was banned by the Nazis), who were killed here or dragged off to concentration camps where they perished. Many of those same individuals were undoubtedly Jewish, and I like how the stones on top of the memorial expand its meaning and speak poignantly about the breadth and depth of the tragedy.
Posted by Elizabeth Hornbeck at 4:12 PM