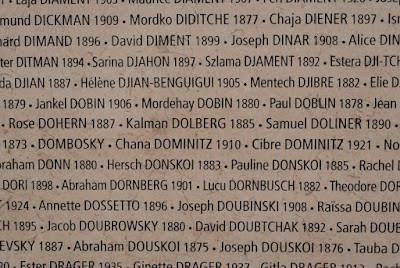 Last Saturday my French friend’s mother – my hostess for lunch – asked me directly, “Are you Jew?” – sending her children and her granddaughter into a fluster of embarrassment. (Their excuse: she’s 85 years old.) Madame Cohen’s English is quite good, though of course “Are you Jewish?” might be the preferred idiomatic phrasing. When I answered “no,” she seemed a little disappointed and turned back silently to the photos she’d been looking at. After a minute or two I piped up, “but my husband is Jewish!” as if to redeem myself in her eyes, and received a smile and a cluck of approval. [She was already a bit suspicious that an American might be carrying the swine flu virus into her home; my assurances that I’d been in Europe for the past five months didn’t seem to dissuade her.]

Madame Cohen and her late husband both were Egyptian Jews; they left Egypt in 1950 when, according to my friend / her daughter, “it was clear there was no future for Jews in Egypt.” Soon afterwards the Jews remaining in Egypt were expelled. The plight of European Jews during World War II was not their personal story, but like Jews everywhere, the long history of persecution, eviction, and marginalization suffered in so many countries is one they share. 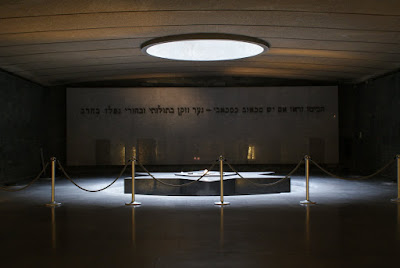 Documenting the story of the French Jews during World War II, the Shoah Memorial in Paris’ Marais district is a tribute to the 76,000 French Jews who were deported from France between 1942 and 1944. It was opened to the public in January 2005; this was my first time to see it. (Prior to 2005 it existed as a Holocaust documentation center, but was not open to the public.) In the same vein as the Vietnam War Memorial in Washington, D.C., the Shoah Memorial has a wall (actually walls) engraved with the names of the 76,000 French Jewish deportees, as well as a detailed exhibition of the history of the Holocaust. (To quote the literature: the word “Holocaust” is commonly used in Anglo-Saxon countries, whereas the Hebrew word “Shoah,” which means “catastrophe,” is used in France.) There is also a crypt – a symbolic tomb – containing ashes of victims collected from the extermination camps, with an eternal flame in the center. It’s a very somber, meditative space. 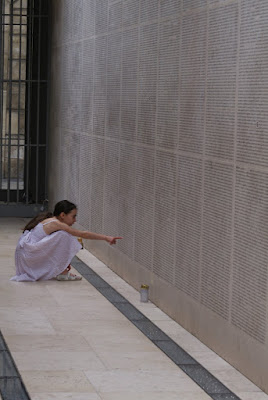 The Wall of Names lists the year of birth of each deportee; what’s especially poignant is the fact that so many of them were children, many quite young children at that. As the mother of a child who is more than one-quarter Jewish (my husband being five-eighths Jewish), I am quite conscious that their fates could have been ours had we been born in a different time and place. One room in the memorial displays 2,700 photographs of French Jewish children who were deported.

France (or Paris, at any rate) has been quite active in remembering and commemorating its victims of Nazi persecution. Also new in Paris since I lived there ten years ago are memorial plaques posted around the town, particularly in the Marais district, where most of the Jews lived. Here are three I found: 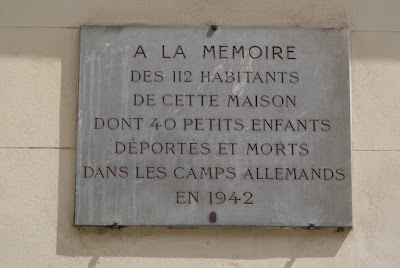 “A la memoire des 112 habitants de cette maison dont 40 petits enfants déportés et morts dans les camps allemands en 1942.” (“To the memory of the 112 inhabitants of this building, among them 40 small children, who were deported and died in the German camps in 1942.”) 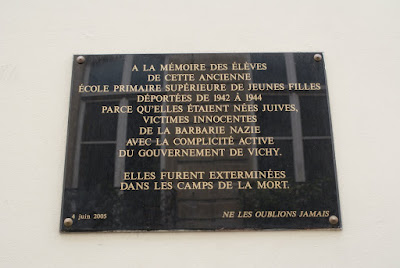 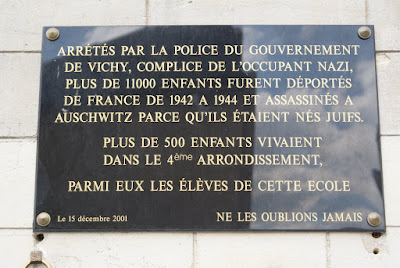 I’m not sure these memorial plaques are directly connected with the Shoah Memorial, but both the plaques and the Shoah Memorial reflect an even greater consciousness about the persecution of French Jews than I noticed when I lived in Paris ten years ago. This is a level of consciousness – and of consciousness-raising – that is not so much in evidence in Germany, where I’ve spent the past five months. Of course Berlin does have major memorials and museums, but t not so many minor ones that one encounters them in one’s daily life. In the former East Germany / East Berlin, most of the memorials I’ve seen from that era commemorate the persecution of Communists by the Nazis.

Anti-Semitism, like bigotry and racism, do exist in the United States, but it’s hard (for me at any rate) to imagine the complete sense of marginality and “otherness” with which non-Jews in Europe regarded Jews prior to World War II. Even after World War II, some countries denied citizenship to Jews born within their borders. In my own experience, I am not Jewish but I have a first cousin who is Jewish (through her mother); my grandmother has a first cousin whose children are Jewish (through their father). Noone in my Gentile family has ever felt themselves different from the Jewish members of the family. Because I grew up in a provincial and very segregated place, though, I grew up with little exposure to Judaism, and I thought of it as just as another religion that a person might choose to follow, like Catholicism or any of the Protestant sects. It was not until I went to college, at Northwestern University, that I made a number of Jewish friends and became more aware of Judaism as an identity that went much deeper than simply religious persuasion. 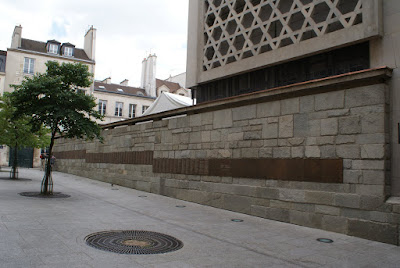 One further feature of the Shoah Memorial is the Wall of the Righteous (inaugurated June 2006) on the exterior of the building, along the so-called Allée des Justes. It is engraved with the names of the non-Jewish men and women who risked their lives in France to rescue persecuted Jews. According to the website, “Each year the award of the Righteous among the Nations is granted by the Memorial Museum of Yad Vashem in Jerusalem. 21,310 Righteous among the Nations have been recognized thus far worldwide, including 2,693 in France.” One can’t help hoping that in their situation, we would have risen to that level of heroism – and hoping as well we never find ourselves in such a situation.
Posted by Elizabeth Hornbeck at 12:26 AM