The Church of St. Denis, Paris 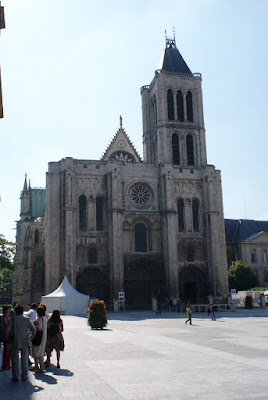 One Saturday morning in Paris I finally made my way to the Church of St. Denis, THE VERY FIRST GOTHIC CHURCH IN THE WORLD. I have been teaching this building in my architectural history classes for the past six years, so it was about time I actually saw it in person. I was fortunate to visit on a very sunny morning, allowing me to appreciate the beautiful stained glass and to see the interior filled with light. (If you visit a Gothic church on a cloudy or rainy day it is not quite as impressive.) 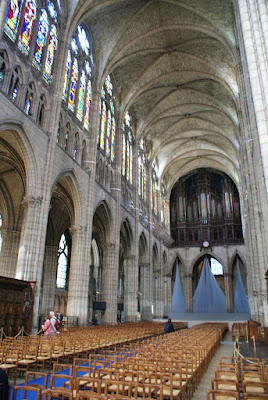 For the story of the birth of Gothic architecture I can recommend a book called The Gothic Enterprise: A Guide to Understanding the Medieval Cathedral by Robert A. Scott. This book makes clear the religious, philosophical, military, political, diplomatic, and other ideological factors that motivated the creation of the Gothic style of architecture by Abbot Suger – head of the monastery at Saint Denis – in the 12th century. This was a very important church, as the kings and queens of France were buried here for centuries. I knew all about the architecture, having taught it for so long, but one new thing I discovered was an icon painting of the saint, which intrigued me because it included representations of architecture in the two upper corners.

Saint Denis – the patron saint of Paris – was a bishop of Paris in the third century who was martyred around 250 A.D. on the hill of Montmartre, the highest point in the city. The Wikipedia entry provides a succinct narrative of his story:

“Denis, having menaced the pagan priests by his many conversions, was executed by beheading on the highest hill in Paris (now Montmartre), which was likely to have been a druidic holy place. The martyrdom of Denis and his companions gave it its current name, which in Old French means ‘mountain of martyrs.’ According to the Golden Legend, after his head was chopped off, Denis picked it up and walked two miles, preaching a sermon the entire way. The site where he stopped preaching and actually died was made into a small shrine that developed into the Saint Denis Basilica, which became the burial place for the kings of France. Another account has his corpse being thrown in the Seine, but recovered and buried later that night by his converts.” 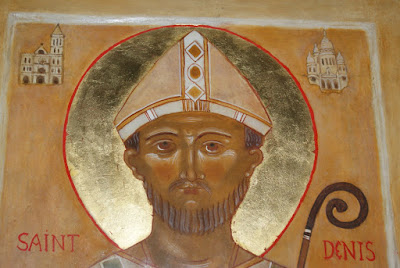 The Saint Denis legend, then, connects him with two points in Paris: Montmartre, where now stands the 19th-century Church of Sacre-Coeur, and the town of Saint Denis (now a Parisian suburb), where stands the church that bears his name. In this icon painting of the saint, notice two buildings in the two upper corners: Sacre-Couer and Saint-Denis. This panel intrigued me because it points out the significance of medieval church architecture not just as a gathering place for religious worship, but as an actual symbol of the person to whom it is dedicated. The depiction of these two structures is a shorthand way of communicating to worshippers the story of the saint’s martyrdom – and I have to admit I find it more tasteful than the usual iconographic representations of the saint carrying his own head! 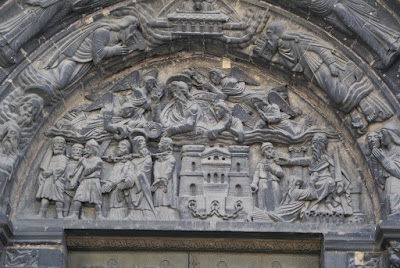 One of the three tympana on the West Portal shows Denis and his three companions being led to their execution; behind the three chained prisoners you can see the city of Paris represented by a fortified city wall. Notice the non-naturalistic scale that allows buildings to be shown in contexts like these; I really admire the creativity of medieval sculptors.
Posted by Elizabeth Hornbeck at 3:19 PM