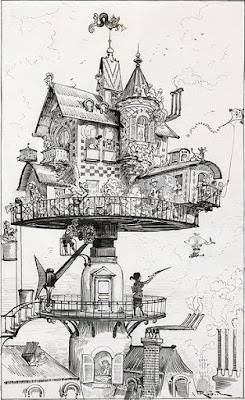 Readers of this blog know that I am prone to posting somewhat random images from time to time, though usually they are related to art or architecture. This one is "Today's featured picture" on Wikipedia.

What is it? Here's the Wikipedia caption:

The artist is one Albert Robida, French, 1848-1926. I'm grateful to Wikipedia because without this pic of the day I never would have heard of this dude. He sounds really cool -- and this image reflects that fin-de-siecle tendency towards utopian imaginings of the future. But I'm afraid there is no such person as Albert Robida, just one of Wikipedia's elaborate April Fool's Day jokes.

(But it's a cool picture anyway.)
Posted by Elizabeth Hornbeck at 4:00 AM