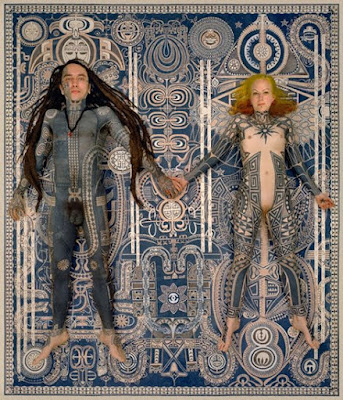 A few weeks ago I met an artist at the market on the Kollwitzplatz; he was working at a booth as a favor to his friend, a jeweller, so I started out talking to him about the jewelry. When I asked him what HE does, he told me about his work, and he even had a poster with him that he sold me for half price. He's an Australian bloke, named Garry Orris, with offices / studios in Sydney and London.

This description of the work comes from the artist's website:

"Completely tattooed Mario and Yvonne's inspiration is derived from the Marquesas Islands in the Polynesian Pacific, it is from there that the word 'tatow' or 'tatau' meaning to mark something originates. For centuries the Marquesas were known and feared due to the cannibalistic rituals of the inhabitants. Entire groups of tribes-men, women and children were tattooed from their fingertips to their toes, under the hairline, on their genitals and even in their mouths. Boys and girls as young as eight were tattooed in preparation for puberty and the process for many was not complete until the age of 30. The Marquesas are famous for their solid black and layered tattooing known as 'pahupahu', this can be seen on Mario's body and on Yvonne's arms. Traditionally it was commonly applied to boys or warriors as a disguise and separated them from all other Polynesian tattoo forms. Nowhere in the world even today can this, the extremist [sic] of all tattooing be found."

Here's another work I found on his website, which also involves couples with enormous tattoos. Rather than commenting on it I will just refer you to the website. 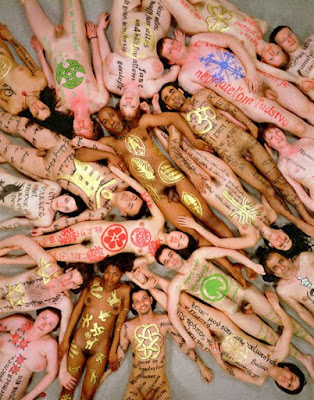 Posted by Elizabeth Hornbeck at 5:23 AM