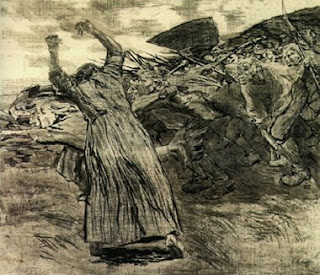 Our apartment house in Berlin is on the Kollwitzplatz, named for the artist Käthe Kollwitz (1867-1945), who lived in a building on the platz for a number of years. The building was destroyed in 1943, but there is a plaque that documents her residence there. Kollwitz was largely a graphic artist, who devoted her life and her art to protest and social criticism. She was the first German Social Realist artist to develop out of the German Expressionist movement during and after World War I. She was concerned with the problems and sufferings of her contemporary world, and produced very powerful images. Her “Death” series of lithographs emphasizes the themes of human suffering and despair. Her son died in the First World War, and that moved her to devote her art to the themes of war and death. 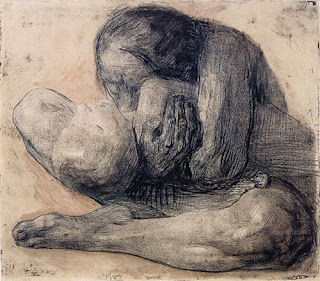 Kollwitz was one of several women artists working in Germany in this period. This was in contrast to the typical situation before the 20th century, when very few women had access to artistic training or careers. There were quite a number of female artists working in the Expressionist movement at this time, including also Paula Modersohn-Becker and Gabrielle Münter. In 1919 Kollwitz became the first woman admitted to the Prussian Academy of Art (Preussischen Akademie der Künste) 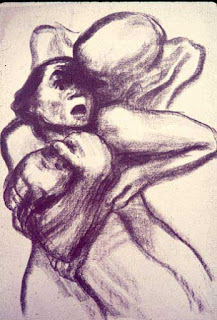 Kollwitz’s realist style was appropriate to her political engagement and social commentary. Her spare graphic style communicates the essence of her message – the raw, unadorned truth – and evokes visceral, emotional responses from viewers. 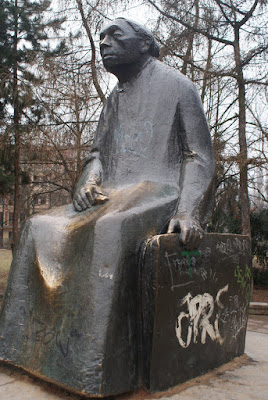 This monumental bronze statue of Kollwitz was made by Gustav Seitz in 1958, and erected in the Kollwitzplatz in 1960, when East Berlin had been under Communist rule for more than a decade. It is an East German monument, but Kollwitz is a heroine not just for (the former) East Germany, but for all Germans.

The simple, almost formless shape of the Kollwitz figure emulates her own etchings. The sculptor has defined the features of her face in broad gestures; she holds a lump of charcoal in one hand, and her portfolio in the other – the tools of her political engagement, and the attributes that define her as an artist.

In response to criticisms of her art, Kollwitz wrote in 1922:

“Ich bin einverstanden damit, dass meine Kunst Zwecke hat, ich will wirken in dieser Zeit, in der die Menschen so ratlos und hilfsbedürftig sind.” (Roughly: I don't mind that my work has a purpose in these times, when people are so helpless; I want my work to help people.) 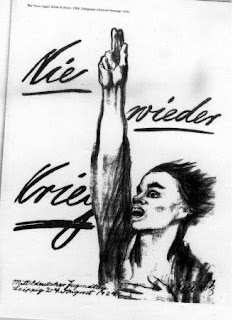 My husband’s family has two stories related to Käthe Kollwitz. His great-grandmother was an art student in Berlin around 1900, when she was 16 and 17 years old. Reportedly, Kollwitz saw her work at the school, and declared that she was a genius. She (N’s great-grandmother) was forced to quit art school by her guardians (she was an orphan), who declared that being an artist was not appropriate for a young lady, who should marry and have children instead. The young lady in question then destroyed almost all of her own paintings.


The second story is this: during the Second World War, when N’s mother was a child, the family fled to Moritzburg (near Dresden), and there they lived in the same apartment building where Kollwitz (who was by that time quite elderly) was also living, with her nieces. At the very end of the war, most people fled from Moritzburg, including Kollwitz’s nieces, who left their dead aunt’s body in the apartment building in their haste to escape from the invading Russians. N’s grandmother and sister attended to Kollwitz’s body, and buried her.
Posted by Elizabeth Hornbeck at 2:09 PM

Hello, I find this article very interesting. I found it while searching about Kathe Kollwitz whose work I admire a lot. I wanted to post a few pictures of her work and of the statue of her on my blog.

Hi, Lucie, You're welcome to use my photo of the statue on your blog. I'd appreciate if you link to my article and credit me as the photographer, thanks. I'd also love for you to put a link to your blog in a Comment on this site. Glad you're interested in Kathe. We visited the Kollwitz Museum in Berlin last summer, it was quite a nice little museum. My husband and son also got to visit Kollwitz's house outside of Dresden, maybe I can post some photos of that too in the next few days.

Now that I have read all about Käthe Kollwitz here I like the statue of her much more! It is wonderful to have those personal links to her too.
My husband's great great uncle (so that is Lucie's great great great)! was a friend of Jules Bastien-Lepage and had his portrait painted by him.
When I visit Berlin I will definintely go and see the statue and the museum.