The Gentrification of East Berlin 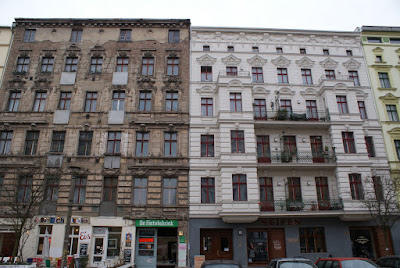 From what I can tell so far, after five days in Berlin, most people in this city live in large apartment houses like the one we are currently occupying (see previous post, below). Though we are living in what used to be East Berlin, I have seen much of the western part of the city, having ridden through it three times in the first three days. The uniform character of the city’s residences – five- to seven-story buildings throughout – characterizes both East and West. Most of them seem to have been built between the late 19th century and the early 20th (up through the 1920s); they vary in terms of architectural detail, but maintain the medium-rise building heights, regular fenestration, and similar building profiles that you see in these photos.
(Note: having recently ventured further east, I noticed a lot of 11-story apartment blocks from the Communist era, but rarely anything taller.)

Twenty years after the fall of the Berlin wall, it’s getting hard to tell the difference between the two halves of the city. During the Communist era East Berlin was extremely neglected, but most of the former East Berlin apartment buildings have been renovated and look like they would be at home in any well-heeled city in Europe or the U.S. But occasionally you will run across East Berlin buildings that have yet to be refurbished, and here you can get a sense of just how extreme the renovation has been.

Although I ran across several such structures in about a one-hour’s walk through Prenzlauer Berg one morning, they are by no means typical. It is more common to find entire blocks which have been completely renovated, or there might be one single unrenovated structure in the whole neighborhood.
One famous such neglected outpost in P’Berg is this squat, with an anarchist bookstore next 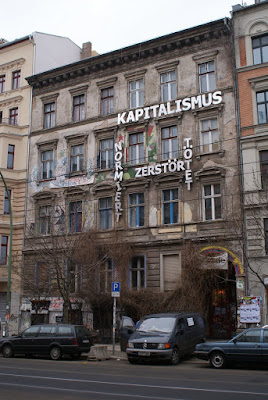 door. A large sign on the façade reads, “Kapitalismus normiert, zerstört, tötet” (“Capitalism homogenizes, destroys, kills”), and there are many similar smaller signs of protest.

Several things seem to be going on here, both in the gentrification and in the protests against it. Both represent the desire to make and to preserve memory, to create a version of the city that conforms to an ideal, and to protest against a competing (“inauthentic”) version of the same city. Four decades of Communist rule produced an East Berlin that was visibly different from its western counterpart; for many this was not the authentic city, but for those born and raised in the Communist era, the changes wrought by the past two decades of West German capitalism seem inauthentic. (Of course we all know how suspect the terms "authentic" and "inauthentic" are, but I use them here deliberately.)
One of my husband's German friends looks with disdain on P'Berg because it has changed so much from the old days; it's the German equivalent of a Yuppie-ville. But there is some resistance, evidenced by this squat.
Posted by Elizabeth Hornbeck at 1:49 PM

"it's the German equivalent of a Yuppie-ville" that is absolutely not the truth,dear Elisabeth: exactly behind these two houses on your photograph -in the Oderberger street in Prenzlauer Berg- the stofanel investors have to face fierce resistance of berlin citizens AGAINST the planned Yuppie "urban village": http://www.time.com/time/world/article/0,8599,1881451,00.html
"In Berlin, a Gentrifying Neighborhood Under Siege" not only at Marthashof! your husband's German friend should not just look with disdain on the facts, he should join the "AnliegerInitiative Marthashof AIM":
http://marthashof.info/ in german, http://marthashof.org/
within this global crisis, we take the opportunity of rising against the devastation of our cities and living conditions, for the unique Berlin, not another copy of London or others!