The Volto Santo of Lucca 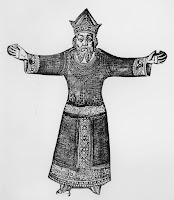 No, this is not Santa Claus. It's supposed to be the crucified Christ, fully dressed. Seeing as how it was made in the 15th century, he's not exactly wearing historically accurate clothing for the 1st century, even for someone NOT being crucified. I ran across this image in the ARTstor database while searching for images of Bramante's Tempietto of San Pietro in Rome. This just goes to show how odd search engines can be. I like that they are more inclusive rather than less inclusive, because it lets people like me see unexpected things that our normal scholarship and teaching might never lead us to.

It represents a statue found in the Cathedral of S. Martino at Lucca -- an over-life-size wooden statue, possibly from the late 12th century. It is "one of the best known and most venerated of all icons in Italy" (according to ARTstor).

More from ARTstor: "The legend of the Volto Santo has been hopelessly intertwined with that of a female saint, known under a variety of different names, who preserved her virginity by taking on Christ's features, beard and all, and was then crucified....The statue is reputed to have been sculpted by Nicodemus - all but the head, which was fashioned by angels while Nicodemus slept....A fresco of Nicodemus carving the statue...is in Lucca's cathedral. Said to have been brought to Italy in the eighth century, the statue's fame as a goal for pilgrims was almost unparalleled during the middle ages and beyond. Reproductions of it are common today and were surely just as numerous in the quattrocento, a popularity evidenced by the construction in 1482-84 of a new chapel, or Tempietto del Volto Santo, designed by Matteo Civitale. Many versions of the image survive from the Renaissance onward, and they show a remarkable amount of variation in the style and ornament of the dress, the crown, and the face itself. The tunic in this print, for example, is nothing at all like that of the statue, which would often, however, have been covered by a separate, detachable garment. This is still current practice on feast days, although the crown now in use dates to 1665 and the gaudy embroidered skirt to 1818. In all likelihood, accoutrements like those seen in the engraving adorned the statue during the fifteenth century."

Posted by Elizabeth Hornbeck at 10:41 AM

I am a complete film dinosaur but i do love Casablanca