Film Bookends Part II: "Amelie" and "He Loves Me, He Loves Me Not" 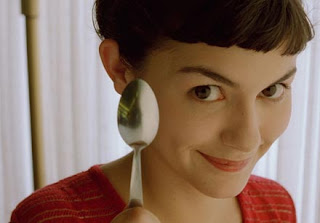 Everyone has seen Amelie -- well, almost everyone, with the exception of those who were deliberately protesting its saccharine-sweet (and borderline fascist?) nostalgia for a sort of pre-immigrant-riots France. It was the big crossover foreign film of 2001. (Full title: Le Fabuleux destin d'Amelie Poulain.) I've got to admit, I liked it. The strangely quiet titular heroine, played by Audrey Tautou, was not all goodness and light; I thought her unexpected romance with the guy who collected photographs of strangers from the Metro station photo booths was borderline kinky and gave the film a subtly eccentric twist. Amelie spent all her time secretly helping improve the lives of those around her, motivated evidently by her love for humanity.

The flip side of that coin is represented in the 2002 film, He Loves Me, He Loves Me Not (or in French, A la folie...pas du tout). It's the same wonderful actress, Audrey Tautou, but this film is like Amelie meets, what? Run Lola Run and Fatal Attraction, maybe, with a little bit of The Sixth Sense thrown in. Sadly I don't know anyone else who has seen it, other than myself and the friend I saw it with back when I was living in Detroit for a one-year teaching gig. Since I don't know anyone else who's seen it, I haven't had much chance to discuss this film with friends. Suffice it to say, you guys are really missing out; you really ought to see this film.

He Loves Me, He Loves Me Not is the flip side of Amelie; it's like, what if the character Amelie weren't actually all goodness and light? What if she were really a psychopath? The problem is, you have to sit through most of the film before it occurs to you that it might actually be a response to Amelie, and that puts the film in a whole new light. My friend who saw it with me hated it, understandably so because it is fairly odd; I would argue that it only makes sense if you read it as an anti-Amelie story. The chief clue is that Audrey Tautou plays both roles. You'll have to watch it yourself to pick up the rest.

Postscript:
Try the "Amelie" Drinking Game at this link
Posted by Elizabeth Hornbeck at 1:50 AM