My Great-Grandparents' House (Part II in the series "My Louisville") 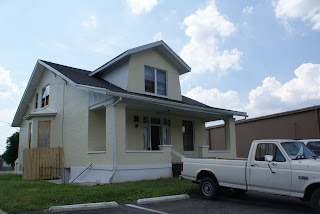 On my most recent visit to Louisville I asked my mom to take me to see the house of her grandparents.  George Herman Bach (1885?-1943) and Lillian Whitehouse Bach (1899-1954) lived in this brick bungalow on Dixie Highway in Shively; I don't know when they first moved in, but my grandmother, Lillie May Bach (1919-2007), was born here.

This house is just north of Algonquin Parkway, the third structure from the corner, on the west side of the highway.  This is the house in which my grandmother grew up with her younger sister and brother.  Their dad was a butcher at a nearby butcher's shop on Dixie Highway.

The last time we visited this house it was standing empty with a "For Sale" sign; all the windows were boarded up, and the red brick still looked as it always had.  On this visit (June 2013), the house had gotten a new lease on life:  a new owner had painted the brick a pale yellow, and the interior is in the process of being refurbished.  In this photo you can see a fellow standing on the front porch, talking on the phone; he was working on the house, and talking to the owner.  He asked me if I wanted to talk to the owner myself, and handed me his phone. 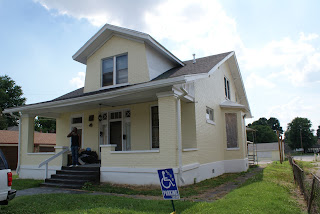 My great-grandmother (whom, of course, I never met) lived in this house until she died in 1954, but then it passed out of our family.  The present owner had never heard of the Bachs, but did know the previous family who lived here, I think he said the woman's name was Alma White.

The present owner is fixing it up -- the bags of trash on the front porch are stuff they have taken out of this long-unoccupied building -- he says he hopes to have a residential unit on the second floor and commercial on the first floor. 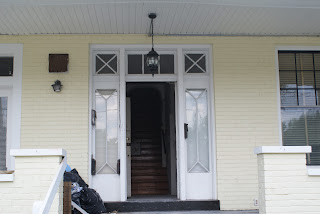 I love this photo of the front door with its side lights and transom lights.  My mom says that her mom would be really happy to see that her parents' house is getting some TLC.  For my part I was happy to see that it was no longer standing neglected and empty, and I was relieved to see that it's still standing.

This type of brick bungalow is quite common in Louisville, and all over the country, in fact.  Bungalows date from the early 20th century, when streetcars were common and private cars were not.  Bungalows don't have garages, as you can see in this photo.  Once the automobile became more common, detached garages were built.  Later, houses with carports, and eventually attached garages, were built; the ranch house displaced the bungalow as the most popular vernacular architecture type.

On Dixie Highway many houses have disappeared to make way for commercial development, but north of the Watterson many remain residential too.  Just north of my great-grandparents' house is a large discount store called Save-A-Lot, so it's not inconceivable that this house could have succumbed to the bulldozer at some point like its former neighbors.  I'm hoping to see it occupied on my next visit, whenever that happens; and if it's a commercial occupant I might finally get to go inside.
Posted by Elizabeth Hornbeck at 3:28 PM