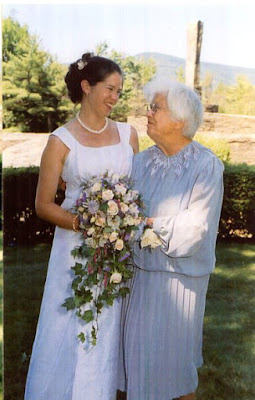 My dearly beloved grandmother, Mescal Hornbeck, died on January 19, 2011, at the age of 99-1/2. I was very close to her, and her death was a major loss for me. I had seen her only about three weeks before she died, and she was in good health. Her death (from congestive heart failure) came as a shock to me, because somewhere in the back of my mind I really believed she would live forever. I was fortunate to spend two months with her in the summer of 2010, along with my son, Eli, and to have seen her frequently during 2010. I miss her so much.

One gesture of mourning that I made was to cut off my hair after she died. Sometimes Hindus shave their heads in mourning for a close family member, such as a parent or spouse. I did not go quite that far, but did cut it pretty short, as short as I could stand to. After not having cut it at all for 5 years, this was a radical change.
What was the point of cutting of my hair? It was a number of things. For one, it represents for me the major loss of one of the most important people in my life. For another, it represents my transformation. I can no longer in any way think of myself as a child, because I have no more living grandparents. At age 47, of course, and being a parent, I stopped being a child quite a long time ago, but something about having that amazing matriarch -- the wizened elder, the sage --made me feel like I was in some sense still sitting at her feet, at least figuratively. Now I am one generation older; the elders in my family are my parents and their generation.

I do feel that 47 is fairly old, but my grandmother was still more than twice my age. Therefore she was always right -- though she would listen to other people's point of view, at least most of the time. She was cantankerous and difficult to get along with sometimes, but she was also an amazing individual who made quite a contribution to the world.

We held a "celebration of her life" on June 18, in Woodstock, New York, where she had lived for the past 40 years. It was the day after what would have been her 100th birthday. This was a remarkable experience for me, and I will be reflecting on it for quite some time. Maybe some of my reflections will make it onto this blog, but most of them will remain private. Grieving is not really something you can do publicly, I have found.
Posted by Elizabeth Hornbeck at 12:09 PM