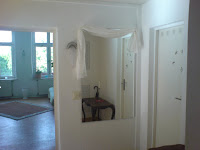 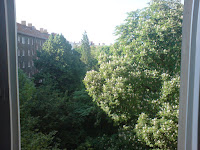 Beginning February 1, the Itinerant Professor will be blogging from Berlin. I will be living there for the next six months with my husband (N.) and 4-year-old son, which is pretty crazy, considering I've never even BEEN to Berlin. In fact, I've only been in Germany for about 24 hours, when I went to Stuttgart in 1996 to see the modernist housing complex known as the Weissenhofsiedlung.
My husband (who HAS been to Berlin) found the apartment on the internet; 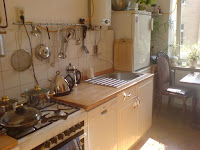 his cousin (who lives in Berlin) visited the apartment to report on it for us. It is a two-bedroom apartment on the third floor of a building situated on the Kollwitzplatz, of which there is a view from our windows. 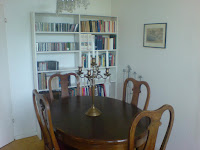 We're living in a part of Berlin called Prinzlauerberg, which belonged to the former East Berlin. N says that P'burg (as it's sometimes known) has been gentrified a lot, but not nearly as aggressively as many American 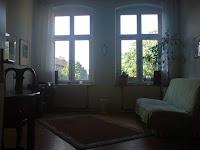 cities, which is why we were able to still find a relatively inexpensive apartment. (Our building is still pretty bare-bones, as if it hasn't been renovated since it WAS East Germany.) And the Kollwitzplatz, with its monumental statue of the artist Käthe Kollwitz, and a large playground, is well loved by affluent parents. 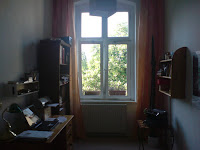 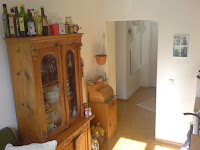 In these photos you can see the living/dining room, kitchen, master bedroom, and the second bedroom (which looks in these photos like a study, but there IS a bed for our son). The long, narrow kitchen (a galley kitchen) reminds me of the one I had in Santa Monica.

N's German cousin visited the place and informed us that, 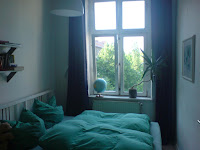 unfortunately, you have to walk THROUGH the living room to get to the bedrooms. This is considered quite a shortcoming for a European apartment, most of which have a long corridor, along which the other rooms are all situated. As we are Americans, this "disadvantage" will probably not even occur to us, as it is more like an American apartment.
My mother in-law has already expressed her concern that our son will fall out of the window, since it's on the third floor; but I think at age 4, he's smart enough not to do something like that.

Posted by Elizabeth Hornbeck at 2:49 AM