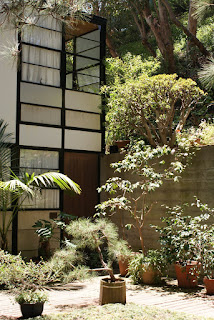 Sunday I made my first visit to the Eames House, more properly known as Case Study House #8, which I have wanted to see for years but never actually visited. The house is located on Chautauqua Blvd. in Pacific Palisades, in a meadow on top of the bluff overlooking the ocean. When the house was completed in 1949 this area was still considered “the boonies,” pretty far away from Los Angeles in the days before freeways. It’s still in a fairly hidden enclave, surrounded by enormous houses (one on top of Casa del Mar looks to be close to 20,000 square feet!). The Eames case study house, by comparison, is 2,300 square feet between the house and the studio, which are located in two separate buildings (1400 sq. ft. in the house, 900 in the studio) connected by a generous patio. 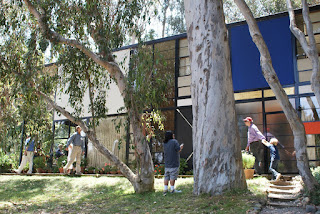 ta Barbara, the late David Gebhard, was interested in the Case Study House program, and talked about it a lot in his classes. The Case Study House program was an attempt to popularize modern architecture, to make it more widely accepted, more mainstream. It was sponsored by the magazine Arts and Architecture, chiefly by its editor, John Entenza; the magazine commissioned the houses, which were paid for by clients. These were meant as prototypes for suburban housing. Most of the Case Study Houses had open plans built in flexible systems with interlocking outside/inside spaces, and were designed for what Gebhard called the “mobile, efficiency-minded and consumer-oriented mass culture.” The program completed 23 Case Study Houses between 1945 (when they were commissioned) and 1962. The Eames house was one of four Case Study Houses built in this wooded tract on palisades overlooking the ocean; next door was the Entenza House, designed by Charles Eames and Eero Saarinen (his old friend from Cranbrook). Another Case Study House on this block was designed by the Viennese architect Richard Neutra. 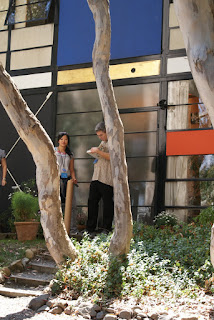 As a building type, the glass-enclosed pavilion was suddenly huge in American architecture in the 1940s, due to the influence of German Bauhaus architect Ludwig Mies van der Rohe, who immigrated to the United States in 1937. He had developed the pavilion as a recurring theme, most notably in his Barcelona Pavilion (1928-1929). In 1945 he designed the Farnsworth House (completed in 1951) in rural Illinois, and under his influence, Philip Johnson designed his own famous Glass House (1949). Both of those were meant as one-of-a-kind “masterpieces,” high-end examples of a kind of luxury home with a certain austere, minimalist aesthetic. The Eames House, on the other hand, was built inexpensively and, although unique, was intended as a prototype for middle-class dwelling. It was assembled from pieces ordered from catalogues; its ready-made structural elements contrast with personal décor of the interior. Here in the Eames house, the Miesian vocabulary takes off in a lot of directions, incorporating a Mondrian-like color palette in contrast to the monochromatic predecessors. As in Mies and Johnson’s houses, we see transparency and opacity at play. Instead of looking anonymous it looks very personal. 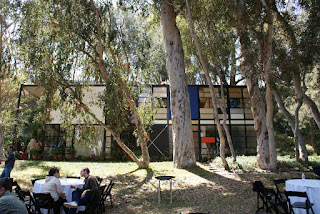 Those who work in the House say that because of the glass walls, after being there for a little while you forget the building is there; you feel like you're in nature, surrounded by trees. (The house is bordered by towering eucalyptus trees.) On the tour one of the guides told us the Eameses said that after they had lived in the House for a few years, it "disappeared" for them. 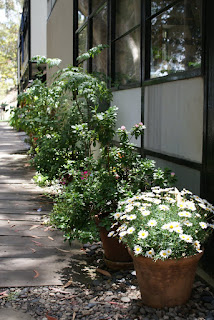 Entenza hoped the Case Study Houses would be not merely single performances but plans which could be repeated. Their critical success promoted public acceptance of experimental design; in 1962 Esther McCoy wrote,

“The banks had previously taken the view that a house with glass walls, open plan, no dining room, kitchen facing the street, flat roof, and slab floor was a poor investment and had no resale value. That all Case Study Houses were excellent investments is proved by the prices at which they have been resold. Three Case Study Houses sold recently fetched 90 to 125 percent above the original cost.”

The house’s historical significance was confirmed by its National Landmark Status, conferred in 2006.

The event I went to on Sunday (see photos) was a Members Appreciation Day, the only day of the year when visitors (i.e., donors) are permitted inside the house. The rest of the year, visitors may only tour the exterior of the house. The Eameses’ daughter, five grandchildren, and numerous great-grandchildren (as well as one great-great-grandchild!) were present at the event, and were very generous and gracious hosts. They as well as various docents and employees of the Eames Office (at 850 Pico Blvd. in Santa Monica) were on hand to answer any questions and converse with donors for a large part of the day.

Another first – I had never been to a first-day-of-issue ceremony, and this one (held at the Eames Office) turned out to be a lot of fun! The U.S. Post Office issued a beautiful set of postage stamps with 16 different Eames designs, from architecture to furniture to film and textile design. This U.S. government ceremony began with the “presentation of colors” (flags of the nation and the state of California being walked up and down the aisle) and the national anthem (sung by Melodi Dalton, an appropriately named soprano with the San Francisco Symphony), followed by brief remarks by the postmaster and the mayor of Santa Monica; and finally Eames Demetrios, the chairman of the board and grandson of Charles & Ray Eames making a brief thank-you speech. There were so many people and so much going on! One line to buy stamps, another line to get your first-day-of-issue cancellation stamp on your stamps and envelopes and memorabilia, and another line where you could collect the signatures of all the family members present. Most of those present for the ceremony were Eames fans, but there was also a small clique of hard-core philatelists who had their systems for creating first-day-of-issue memorabilia honed to a science. These folks had made their own cards and envelopes and had developed elaborate systems of cataloguing their creations once cancelled; the mind-boggling thing about it to me was that they weren’t necessarily fans of Charles and Ray Eames, just serious stamp collectors! They would travel to these first-day-of-issue ceremonies whenever they could, and trade their cancelled memorabilia with other stamp collectors they meet at conventions.

"The Work of Charles and Ray Eames: A Legacy of Invention," exhibit at the Library of Congress

Rik bought a sheet of the Eames stamps when he was in Indiana last week. The post office clerk couldn't believe he wanted them; he said that they were ugly and customers were refusing them. What do you think of that?

Annie, That's so odd. I mean, there are so many stamps available, and many of them are less attractive (in my opinion) than the Eames stamps. It's probably because most people have never heard of the Eameses or seen their work. Fortunately the post office felt differently; it's pretty rare for them to issue a sheet of stamps with all different designs (in this case there are 16); usually there's just one design, or maybe 4 designs that are repeated multiple times on a sheet. I think that the Eames people (both families and employees of the foundation) are hoping the stamps will make the Eameses more widely known.