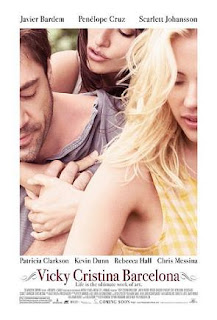 Readers of this blog know I'm a huge fan of Scarlett Johansson, and Vicky Cristina Barcelona delivers not only Scarlett but also the stunning sexiness of Spanish actors Javier Bardem and Penelope Cruz. I found the film to be satisfying all around, despite the abrupt ending that some viewers left the theater grumbling about; after all, how can that many gorgeous, young, wealthy characters in a smart Woody Allen screenplay fail to excite and amuse? This is my favorite Woody Allen film in years (despite the presence of one of my least favorite actresses, Patricia Clarkson).

Rather than discussing the obvious aspects of the film, though - a realm thoroughly covered by all the other reviews - I wanted to say something about a theme of the film that has been of special interest to me this semester as I am teaching a film studies & art history class called "Artists' Lives on Film." Vicky Cristina Barcelona has at its Spanish center (as opposed to its American center, represented by the Vicky and Cristina characters) a pair of painters. Juan Antonio and Maria Elena (played by Bardem and Cruz) are a divorced couple embroiled in the, dare I say, stereotypical Latin romance, in which heated passion takes the form of violent fighting more often than of reckless sexual abandon. They are also artists.

Many of the films I have taught in my class treat famous artist couples: Surviving Picasso, about Pablo Picasso and his lover Francoise Gilot; Frida, about Frida Kahlo and her husband Diego Rivera; Pollock, about Jackson Pollock and his wife Lee Krasner; and Camille Claudel, about the French sculptress Claudel and her lover, Auguste Rodin. All of these biopics (fictionalized biographies) take as their subject matter actual, historical artists, and therefore have to maintain at least some slight level of historical veracity. Vicky Cristina Barcelona, with its fictional artiststs, is entirely free to invent those characters from scratch. Woody Allen nonetheless adopts and reifies many of the stereotypes that are associated with artists in the popular imagination, but he subtly undermines some of them, especially the negative stereotypes about male artists. (Not surprising given that he is one.)

In all of the above-mentioned biopics, the artistic couple follows a familiar pattern of the male as domineering womanizer, and the female partner as either driven mad or driven away by his cruelty. Those men - Picasso, Rivera, Pollock, and Rodin - are megalomaniacs whose success (based on their artistic genius) overshadows the careers of their partners. The women, meanwhile, struggle for recognition in a male-dominated world. As women they are victimized both by their male partners and by their societies which see women as less creative and less "important" artistically. The men are egotistical, destructive and/or self destructive; the partnerships are destroyed by the partners' competition and their unequal power in their relationships. At the same time, the women are expected to subordinate themselves and to support their men's careers.

This is not to say that those films misrepresent the nature of those relationships, but rather that filmmakers (Hollywood and otherwise) are drawn to that subject matter as the kind of story that audiences want to see, in part because of the implicit moralizing that underlies those narratives.

Three common artist mythologies prevail in these films. Two of these myths are gender-neutral: the artist as crazy (Camille Claudel is eventually committed to an insane asylum), and the artist as self-destructive - a slight variation on the "crazy" theme. Attempts to commit suicide, or at least very high-risk behaviors, characterize artists like Jackson Pollock, who dies as a result of drunk driving (he's a major alcoholic). The third common artist mythology applies specifically to female artists: the woman as victim, driven to desparation by her faithless and cruel husband. Picasso, Rivera, Pollock, and Rodin all are womanizers who subject their partners to emotional cruelty. Frida Kahlo is portrayed as the most victim-like female artist in that her very paintings are read (by art historians as well as filmmakers) as testaments to her pain and victimization.

Woody Allen's male artist, Juan Antonio, is a womanizer, but he's not cruel. He's represented as a generous lover to all the women he sleeps with, guilty only of a libertine lifestyle that flies in the face of bourgeois notions of monogamy, but noble for his honesty and for the great respect he shows to these women (none of whom are bourgeois enough to demand monogamy from him, with the exception of his wife). Woody Allen, whose own relationship history has been the subject of scandal, wants us to believe that a man who sleeps with as many women as he likes (up to 15 years his junior in this film) can be blameless; Juan Antonio is a very sympathetic character.

Surely this is, to some extent, Allen's fantasy (and that of many middle-aged males) projected on the big screen. But what is the alternative? Is the stereotypical artist biopic, in which the men are cruel womanizers, any more desireable as a message? Allen avoids moralizing, which is part of what's so refreshing about his films.

And it's not only a male fantasy we see projected here; the film offers women the fantasy of being swept off their feet by a gorgeous stranger in an exotic land. One of the best scenes in the film is Juan Antonio's first encounter with Vicky and Cristina, in which the two women debate whether to accept his invitation to spend the weekend with him. While Vicky (the voice of reason) has all the dialogue, Cristina (the risk-taker) has all the body language. The conflict between their responses to Juan Antonio could almost be the inner dialogue of any woman in such a situation, trying to decide between safety and adventure.

Penelope Cruz's Maria Elena falls more squarely into both the artist-as-crazy and the artist-as-destructive stereotypes. She enters the film after a failed suicide attempt, and her last scene is one in which she brandishes a gun, trying either to kill herself or Juan Antonio, or both (it's unclear). One of the best essays on artist mythologies in film is Griselda Pollock's “Artists Mythologies and Media Genius, Madness and Art History,” in Screen, vol. 21, no. 3 (1980), pp. 57-96. In discussing this essay in class yesterday, I learned that many of my students do strongly believe that artists ("great" ones, anyway), genuinely are mad, despite Pollock's arguments to the contrary. (For the record let me say that I do not share this opinion.)

Some of my students believe that commitment to one's work (which some call obsession) exhibited by some artists is a sure sign of insanity. I, on the other hand, believe that passionate commitment to one's work (which might also be described as being a workaholic) is the one characteristic shared by all highly successful people in ANY profession. Even the great comedian George Carlin, whose public persona was the slacker and anti-establishment rebel, was a genuine workaholic; noone could rise to his level of accomplishment without such dedication to his art.


Getting back to Vicky Cristina Barcelona, we do see these two artists, Juan Antonio and Maria Elena, at work. Both create abstract painting in the manner of Jackson Pollock. We see Juan Antonio slathering paint on his canvas with enormous brushes and fluid brushstrokes. We see Maria Elena (dressed in a teddy) dripping and drizzling paint onto a canvas that lies flat on the floor (Pollock's famous method). When Juan Antonio performs the same type of art-making ritual outside in his garden it appears to be a deliberate quotation of the famous Hans Namuth documentary of Jackson Pollock at work. Woody Allen has his painters work in this manner, I think, because it is a shorthand for the modern artist. The paintings themselves are unremarkable, but what is remarkable is the fact that the two painters produce stylistically similar works rather than having individualized artistic styles. (I also like the poster for a Paris exhibition of Juan Antonio's work that is discreetly displayed in the artist's kitchen, which serves to confirm his identity as a significant painter.)

It is Juan Antonio and Maria Elena's artistic productivity and creativity that Cristina envies. Together the two encourage and inspire Cristina to develop her own creativity as a photographer, so that in the film she becomes the third artist represented on screen. At the heart of their creativity, for all three artists, is sexuality, and herein lies yet another favorite theme for films about artists. In their menage a trois, uninhibited sexuality provides the creative energy for both work and inspiration.

The close connection between art and sex is the theme of another of my favorite essays on artist biopics: Susan Felleman's “Dirty Pictures, Mud Lust, and Abject Desire: Myths of Origin and the Cinematic Object,” Film Quarterly 55/1 (2001): 27-40. Felleman discusses both Camille Claudel and Artemesia as prime examples in which the sexual relationship between artist couples is the prerequisite for artistic greatness. Woody Allen gives further credence to this notion in his latest film. Art equals sex, and artists are incredibly sexy, despite any emotional imbalances they might suffer from.
Posted by Elizabeth Hornbeck at 10:48 PM