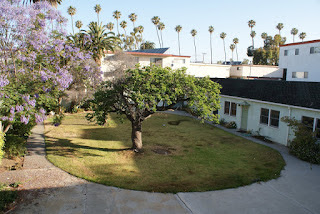 One powerful and sad experience I had this summer was the final visit to my home of 14 years in Santa Monica. Final, because the building is slated for demolition this summer. All the tenants were evicted as of April 1, 2008, with demolition scheduled for that month. Then it got pushed back to May, then June, and when I left on July 8 it was still standing, looking melancholy in its state of abandonment. 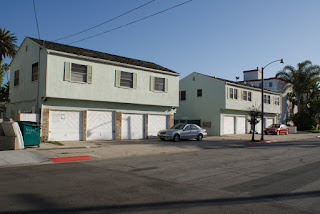 The building, a complex of 13 units arranged around a courtyard, was probably built in two stages: the first in 1940 (10 single-story units), with an addition in the 1960s or 1970s consisting of 8 garages with three units above them, closing the courtyard off from the street. (I say probably because this is just an educated guess). In the 1940s, Santa Monica was largely a vacation destination, a seaside community of beach cottages. The building had no insulation against the weather, leading me to suppose it was intended only for short-term vacation rentals (though I don't know this for a fact). The building is two blocks from the beach, so it would have been a perfect location for vacationers. 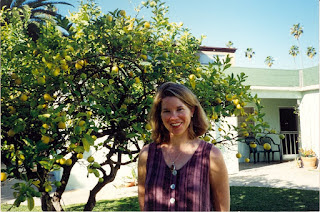 My apartment, a one-bedroom unit, was in the rear, right-hand corner; in this photo taken of me in 1998, the door to my apartment is visible.

The courtyard was so beautiful. There were three lemon trees, which bore fruit year-round. The black-and-white photo shows my friend Marc's younger son (who is now 12) climbing in 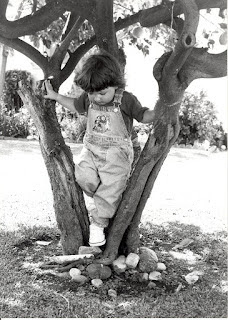 the largest of these lemon trees. There was an enormous apricot tree, which bore abundant, sweet fruit. There were fig trees, jacarandas (the purple-blossomed tree that is so popular all over Southern California), roses; most of the ground-floor units had individual plots for flowers. The red-haired baby in the next photo is Olivia (now 11) when I was babysitting her; she toddled in this courtyard during the first week that she was walking. 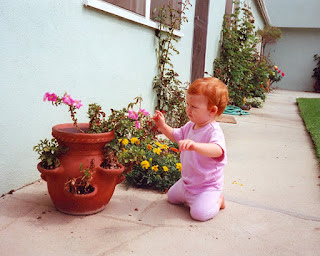 When I lived in Santa Monica (1988 to 2002) the owner was Edna Hummer, a nice old lady who loved the building and took incredibly good care of it. Gardeners came weekly to mow and water and prune. Today the lawn is turning brown, with large patches of dirt.
Sometime after I moved away, perh 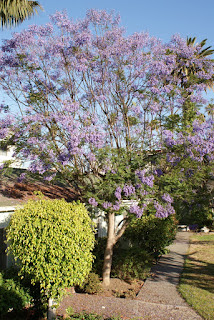 aps 2003 or 2004, Mrs. Hummer sold the property to Tony Dow (of "Leave It To Beaver" fame) whose intention from the outset must have been to develop it. Property values in Santa Monica were skyrocketing -- had been doing so for decades -- and it's a miracle that this little gem of an apartment complex survived as long as it did. Under rent control it was not generating much revenue for its owner, though evidently enough for her to be satisfied. Mr. Dow, though, seems to have much higher expectations for financial return. So he finally evicted everyone and is planning to erect seven condominiums, each of them close to 3,000 square feet (which, incidentally, is larger than the average single-family house). All those beautiful trees will be destroyed, not to mention a real relic of Santa Monica's past. I will never watch "Leave It To Beaver" again.
Joan Didion on Architectural Demolition
Just before my visit to Santa Monica I read Joan Didion's memoir The Year of Magical Thinking. In it she describes the destruction of a house she lived in in Los Angeles with her husband and daughter Quintana:
“In point of fact the house in Brentwood Park from which I had seen the red flashing light and thought to evade it by moving to New York no longer existed. It was torn down to the ground and replaced (by a house marginally larger) a year after we sold it. The day we happened to be in Los Angeles and drove past the corner of Chadbourne and Marlboro and saw nothing left standing except the one chimney that allowed a tax advantage, I remembered the real estate agent telling me how meaningful it would be to the buyers were we to give them suitably inscribed copies of the books we had written in the house. We had done this. Quintana and Friends, Dutch Shea, Jr., and The Red White and Blue for John, Salvador, Democracy, and Miami for me. When we saw the flattened lot from the car, Quintana, in the back seat, burst into tears. My first reaction was fury. I wanted the books back.” (pp. 133-134)
Posted by Elizabeth Hornbeck at 11:03 PM

Thank you for the note, my Great Aunt Mrs. Edna Hummer passed away after celebrating her 96th birthday in August, 2008. She loved flowers, life and taking pride doing things right. Although life's journey is much more accelerated we must all take time to appreciate the gift of life and do what is right for our neighbors and those around us. Make it a memorable day, Joe S.