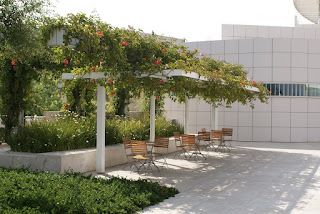 This summer I am extremely fortunate to be spending a lot of time at the Getty Research Institute in Los Angeles, where I am conducting research so that I can turn my dissertation into a book. Not only does the GRI have a fabulous research library and Special Collections, but it's also a fantastic space. This photo shows one of the beautiful pergolas where you can sit outside and have lunch or coffee -- though I'm spending most of my time inside the Research Institute (which is also lovely; hopefully I will follow up with a blog entry about that soon). But that's not all I've been up to; here are a few other things I've experienced over the past week: 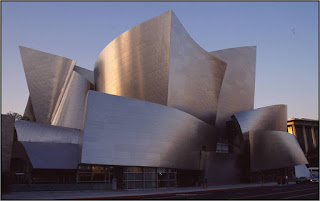 On Sunday we were driving past Frank Gehry’s Disney Concert Hall (downtown – on our way home from dim sum in Chinatown) – and my friend’s 10-year-old son said “it looks like an extreme skatepark.” 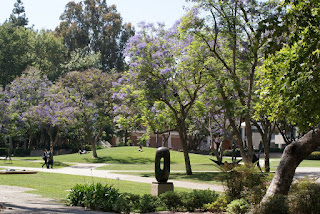 The UCLA campus is one of the most beautiful spots in Los Angeles – it has lots of very old plants and trees, lots of outdoor sculpture, and a nice, somewhat unified architectural ensemble. (Why didn’t I go to school here??) I spent the day here yesterday, in the Arts Library, and visited the relatively new Broad Art Center; in the space that *used* to be the Arts Library, there's now a cafe.
Exhibitions:

The Getty Research Institute mounted a small exhibition on the work of Viennese architect and writer Bernard Rudofsky, whose 1964 book Architecture without Architects fueled an interest in vernacular architecture on the part of architects in the 1960s and '70s. Following in the tradition of fellow Viennese architect Adolf Loos, Rudofsky took a strong interest in fashion, dress, and ornamentation, with an eye to critiquing contemporary Euro-American trends and tastes; he even designed a line of women’s shoes.

I missed the exhibit on Bob Dylan at the Skirball Center, which ended on June 8; but I am planning to take my son to the Skirball to see the Noah’s Ark exhibition when he comes in July. 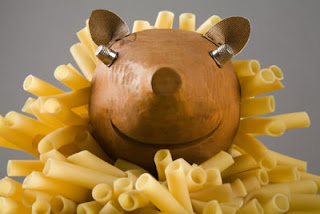 The Armand Hammer Museum in Westwood is mounting an exhibit on the Southern California architect John Lautner, it opens July 13. (5 days after I leave! bummer!) You may know his work if you saw the 1984 Brian de Palma film “Body Double;” his 1960 house called the Chemosphere, in Hollywood, is featured (it’s where the murdered woman lives). Another one of his houses was used in the James Bond film “Diamonds Are Forever” (1971), and another one in “Twilight” (1998).

Film:
On Sunday night I got to catch a film at the new and improved Aero Theater on Montana Avenue in Santa Monica. For most of the time I lived in Santa Monica (1988-2002) this was an independent theater showing nightly double features for $5 -- the best deal around. Then it fell on hard times and was losing money, the quality of programming suffered, and everyone was afraid it would have to close its doors. It was finally acquired by the American Cinematheque and reopened in January 2005 after being beautifully restored and given state-of-the art equipment. Now it has a very exciting schedule of rare, recently restored, and special interest films, which we used to drive to Hollywood to see (at the American Cinematheque's original venue, the Egyptian Theater). On Sunday we saw "Breezy," a 1973 film directed by Clint Eastwood and starring William Holden and Kay Lenz; it was a real period piece, and gave me a new appreciation for Holden as an actor.
Performances:

Last Friday at Highways Performance Space and Gallery in Santa Monica, I attended a 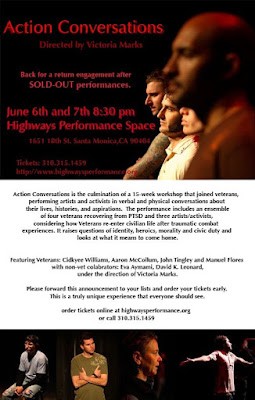 moving event called "Action Conversations," directed by choreographer Victoria Marks. The performance was created by artists, activists, and veterans recovering from PTSD; they worked together in a 15-week workshop, creating a performance that deals with the experiences of veterans trying to reenter civilian life and the encounters between veterans and civilians. The event was important in creating dialogue between vets and civilians, and bridging the gap that usually prevents us from understanding one another. There was one moment that required audience participation in a call-and-response format, with these words: "We risked our lives in Troy/Iraq, and the Peloponnese/Afghanistan and in Ionia/Kuwait." Having recently taught The Iliad, I thought a lot about the parallels they were trying to draw here, in a way I'd never thought about them before. The concept of a "hero" in the ancient world is so different from today's Christian-influenced concept; Achilles was no moral paragon, but a "hero" nonetheless. Food for thought.

Speaking of food, I was walking along Westwood Boulevard yesterday and passed a restaurant called India’s Oven, I knew that I knew it, but not in Westwood. I picked up the menu and it said “originally located at Pico and Fairfax,” and I realized this was the awesome Indian restaurant I used to go to, back in the late 1980s (when they used to serve everything on Styrofoam!). During the 1992 Los Angeles Riots (which some people call the L.A. Uprising) I was watching the live news coverage on TV (like everyone else in L.A.) and at one point saw it – India’s Oven, on Pico Blvd., one of my favorite restaurants at the time – with flames shooting out of its windows. After that it appeared in West L.A. – no more Styrofoam – and I don’t know how it ended up in Westwood. I see they still have Ras Malai on the menu, my favorite dessert, so I’m going to have to eat here!
Posted by Elizabeth Hornbeck at 2:21 PM